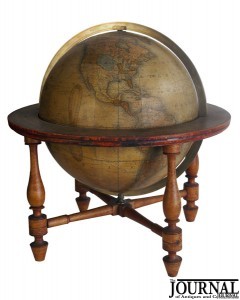 Global Attraction – The Journal of Antiques and Collectibles – April 2012

Nothing in the world beats a globe for saying “This is it!” An earth globe is the one object that shows where we wake, work and live each day in a size that we humans can comfortably relate to. That’s why people ogle, study and spin globes, because they are our space island in miniature.

We have known the earth was round for millennia. Stand on a high point overlooking the ocean, and you can see its curvature and note a ship sailing away disappears over the horizon. The Greeks had globes. Ottoman sultans had globes made of gold and mounted with jewels, which recent mineral encrusted globes mimic gaudily. Celestial globes of the night sky were more valuable than terrestrial globes at that time.

Only the rich, powerful or the scholarly had access to globes until the invention of the printing press in the 1400s. In Fig. 1 the earliest European globe extant is Martin Behaim’s 1493 “Erdapfel” (Earth Apple) Nuremburg, which was made before word of Columbus’ discoveries had spread. Between Europe and the Orient on the orb lies open ocean, no Americas. This was the first example of a globe being out of date as soon as it was finished. Finely made replicas of the “Erdapfel” are available in a variety of stands.

The natural fascination with globes can cause an otherwise rational person (like myself) to start seeing globes out of the corners of my eyes as I walk through antique malls, shows, stores and even roadsides. Never underestimate where you might find an interesting globe. Since people put out trash weekly, you might find a globe that could belong in your globe collection, given a bit of sprucing up. A friend sold me a nice 1920s floor globe he rescued from a curb in Memphis. Another fellow called me about an attractive 24 inch diameter floor globe he saw in a dumpster at the Goodwill.

I had collected maps for 30 years before the globe bug bit. I always had a globe or two, yet my passion had been for maps and atlases. Suddenly I realized the added dimensions of the globe as the perfect round map with oceans and continents that allowed me to hold the whole world in my hands. During the initial globe collecting phase I bought nearly every one I found. Then I decided, as I was running out of space, to focus on putting together a representative assortment of U. S. made globes, since I preferred the American designs, colors and innovations. After a decade and 700+ globes later, I became more selective, as I had filled up the Old Post Office and a large barn that I had converted for globe storage and display (in particular I assembled 200 or so wall maps, atlases and mostly globes made by the Cram Company to show W. L. Douthit, who had run Cram Company with his brother).

During my initial smitten phase someone wrote a short article for a southern antiques magazine about my globe quest. Later I visited a large outdoor antiques fair in southwest Virginia asking every dealer for globes. I poked my head in a large tent and yelled “Anybody have any world globes?” A dealer shot back “No, we don’t have any. Some crazy guy in Tennessee is trying to buy them all.” I informed him, “I’m that crazy guy from Tennessee.”

You don’t have to be crazy to collect globes. You only need to have a keen interest, study a bit, and look at globes wherever you can and determine some focus, to keep you from buying randomly as I did at first. Since there is no “bible” to guide you in globe collecting, the internet is your best bet for learning what is out there that might appeal to you and what range you can expect to pay. American globes provide an almost endless array of sizes, styles, materials, colors, and novelty approaches. In the true American enterprising spirit, each globe maker tried to outdo competitors with such innovations as black ocean globes on a chromed airplane base. There are a half dozen
different variations on this particular theme. James Wilson, the first U. S. commercial globe maker, set the pace when he enlarged the standard table globe from British 12 inches to his 13 inch globe, shown in Fig. 2, announcing that American globes were not only as good, they were also bigger. He began as a farmer/blacksmith, saw a pair of globes at Dartmouth and devoted his life to learning about ink, paper, and map making as well as copper engraving and other skills to make his first globe 200 years ago. For the last century the U. S. has been the world leader in globe making. I concentrated on American globes because of their great variety and easy availability.

Collectors starting today will find American globes of every size, style, and price imaginable. The small tin globes made by J. Chien and Ohio Art companies from 1930 through 1970s, depicted in Fig. 3, were children’s toys but often had enough detail to teach rudimentary geography. These are handy sizes to fit a dozen on a shelf. They are also inexpensive, easily found, and, because they are metal, survived much better than paper ones. Tin globes are also coin banks, or child’s games as shown in Fig. 4, or even moon globes as seen in Fig. 5. This leads to another collectible area popular in the late 1960s during the Apollo missions to the Moon. Some show just the visible side, others show the dark side as it was photographed and some show the Lunar landings. Prices vary from $35 to multiple hundreds for the few rare globes made for NASA or by the Russians.

Also in the affordable area are novelty globes such as globe hand-held pencil sharpeners of painted tin seen in Fig. 6. Germans made many of these and other tin globes from 1900 on. They run between $25 and $75. Then ceramic globes, although more fragile, were mass-produced more cheaply. Many of these appear as salt and pepper shakers, such as the pair sold at the 1964 New York World’s Fair, Fig. 7 (whose symbol was a huge globe). The Wee Bottle Club International, as shown in Fig. 8 sold a tennis ball sized whiskey bottle shaped as a globe. The price is under $50. Moving up in price for ceramic globes, the top of the line is globe cookie jars which can go for as much as $500 in fine shape. Shown in Fig 9. bakelite ink well globes are in the mid-range of this category and come in a rainbow of colors.

Seasoned collectors might prefer older globes for historical or stylistic reasons. The style that has for some unknown reason lost popularity, therefore providing a large buy, is shown in Fig. 10. Standing globes from the 1920s or 30s range from under $500 to over $1,000 depending on size, condition and complexity. Globes were sold in various levels of completeness. The lowest price one had only an orb on a stand. Next came an offset arm and rod holding the orb at the angle of declination. Above this was the orb mounted in a meridian ring on the base. Some added a cradle of metal that allowed the meridian ring to move. The top of the line had an horizon or equatorial ring made of wood with printed paper showing the months and zodiacal signs. It mounted level with the equator and gave the ensemble a final authoritative look. Full mount globes such as this command up to half, again more than the most elementary globe and stand.

For my taste the most dynamic period in American globe innovation was the 1930s to just past WWII. Despite the Depression, major globe makers such as Cram, Denoyer-Geppert, Hammond, Nystrom, Rand McNally, Replogle, and Weber Costello were vying for what remained of the upper middle class market. Cram made black, silver and gold ocean globes on domed metal bases. Hammond cast the most artistic metal stands in a baroque style with green patina. Denoyer-Geppert and Nystrom improved their school globes. Replogle developed a classic “Library Globe” with dark green oceans on Duncan Phyfe floor stands. Weber Costello made globes on airplane bases. Rand McNally began their “Terrestrial Art Globe” series, featuring artwork on the orb: seven historical ships sailing and a clamshell title cartouche flanked by a Mermaid listening to a conch shell and Neptune with his triton as seen in Fig. 11 and 12. They used a variety of ocean colors and innovative bases, including stepped molded glass and, during WWII a stylish round glass base with a concave top in which the orb nestled. Glass saved wood and metal for the war effort.

History buffs might collect globes from this 1930-1945 era, which goes from the buildup in the 30s when Germany takes in Czech territory and Austria, Japan annexes Manchuria calling it Machukuo, and Italy invades Ethiopia renaming it Italian East Africa. Cram and Replogle sent patches during the war to cover areas in Europe that had become part of Germany. Globes with political change patches are rare.

Two centuries of American globe making bequeathed us a breathtaking array of globes to choose from and enjoy. A more detailed look at the development of the globe industry in the United States is worthy of another article describing the democratization of American education with a huge increase in production of globes for schools, and the rise of an educated middle class with interest and wherewithal to buy more stylish globes, considering globes an essential part of their home or office “décor.”

In our increasingly “global” society, as the earth shrinks figuratively with changes in communication, we are ever more attracted to an Earth globe we can turn ourselves or hold in our hands saying “This is it!”

Murray Hudson began collecting old maps during a summer course at Oxford, England in 1964. He received his M.A. in English from the University of Virginia in 1965, taught at Auburn, then Vanderbilt, where he finished coursework for a Ph.D. After seven years as a stockbroker and bicycle trailer manufacturer, he returned to West Tennessee as a the sixth generation family farmer. Meanwhile he was constantly collecting cartography. In 1979 he opened Murray Hudson – Books & Maps. Later he added prints and, especially, globes. He currently has two gallery buildings for globes as well as the original shop in the Old Post Office, 109 South Church Street, Halls,TN 38040 (65 miles north of Memphis) which displays much of the 30,000 atlases, explorations, maps and nearly 800 world globes. These can also be found at his website: http://www.murrayhudson.com, and an enhanced search website: http://antiquemapsandglobes.com.

As the World Turns On Its Wooden Axis