Collecting with Jeff
By Jeff Figler
If you ask a world traveler how many countries they have visited, he or she may not know for sure. However, the person may show you a globe and point out where he or she has been. Globes have been around a very long time. In fact, it is reported that Strabo, who lived from 63 BCE to 24 CE wrote that Crates of Mallos had a globe that was 10 feet in diameter. 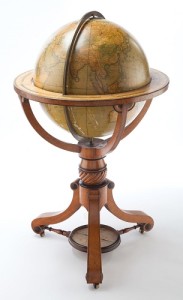 The earliest globe still in existence was made in 1492 by Martin Behaim, who was employed by King Joao II of Portugal.
Globes have always appealed to a large group of people. They have been admired as art objects, as well as for depicting geographically, politically, and economically important lands. Globes have also been exchanged as gifts between important rulers and statesmen. Globes were symbolic gifts in the past to portray the significance of one’s sovereign. However, in the seventeenth century, globes began to be used as gentlemanly accessories or furniture items and matched with desks and chairs. Pockets globes began to be fashionable in England, and were used as status symbols. “English Globes” were produced in the seventeenth century as well which were best used in the garden.
As globemakers needed to be historically correct to reflect new discoveries, globes often became out-of-date. As the eighteenth century witnessed new discoveries especially of the Pacific Islands and New Caledonia, globe makers had to especially be careful when an increasing number of navigators and astronomers began relying on globes.
Soon globes were even being used to educate children, and make them as portable as possible, so that they could be transported between classrooms. However, as new technology was applied, globes would begin to lose their relevancy. For example, when the development of radio-based navigation techniques became feasible in the 1940s and 1950s, globes were no longer needed for navigation. Celestial globes to show man’s position relative to fixed stars were not necessary because of radio navigation. 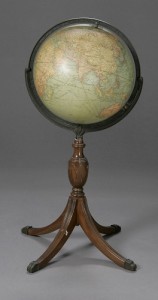 In the twentieth century, globes were mass produced on a large-scale by such companies as Replogle. This meant that the general public was allowed to see the beauty of globes. No longer were they widely used for navigational purposes, but now, more for educating the public, as well as for decorative pieces for offices. An ornate globe is a real addition to a home or business.
Of course, collectors have been attracted to globes as well. Prices of globes have run the spectrum, depending on many factors such as condition, scarcity, and provenance.
For example, a vintage world globe from the early 1900s mounted on a reed base with brass claw feet was sold by Heritage Auctions for over $500. But other globes have gone for substantially more money. A moon globe signed by eight astronauts (including Buzz Aldrin and James Lovell) as well as the NASA flight director Chris Kraft went for $2629 in a 2013 auction. Surely that globe is a highly unique piece and undoubtedly is a conversation item. A Victorian terrestrial globe and compass from 1891 sold for $5000. However, another globe from around 1815 was auctioned for over $21,000. That one, made by J and W Cary was one of a few still remaining from that time period, and used by English statesman. Naturally, many of the countries depicted on any globe even older than a handful of years would be obsolete. However, it is assumed that any collector of old globes, and of maps for that matter, would collect those items for historical as well as for decorative purposes.
So even though globes have lost their importance as compared to the time when they were heavily relied upon, globes have become extremely popular in classrooms. Many globes are wonderfully ornate, and used as status symbols, for display especially in offices. Often, globes will actually be used very sparingly. Nonetheless, globes have been produced to adapt to the ever-changing needs of the user. 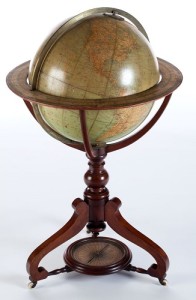 Jeff Figler has authored more than 600 published articles about collecting. He is one of the world’s leading experts on collectibles and is a former sports columnist for the St. Louis Post-Dispatch/STL Today, and San Diego Union Tribune.  Jeff’s most recent book is Picker’s Pocket Guide to Baseball Memorabilia published by Krause Publications. You can learn more about Jeff by visiting his website www.collectingwithjeff.com. He can also be reached via email at info@jefffigler.com.

As the World Turns On Its Wooden Axis