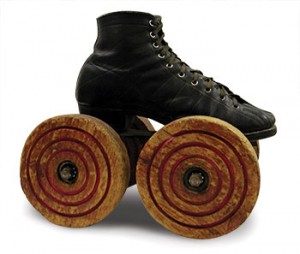 National Museum of of Roller Skates

Paired with all of the skates is the wonderful photographic collection. Each display consists of many of these photos to help illustrate the story. Photos date back to the early 1800s as well as illustrations from early magazines such as the New Yorker. Early rinks are portrayed such as a tent rink from 1924 blown up to a large size. Couples skating saturate the gallery and also spill onto the painting collection. A roller basketball team from 1922, a Halloween party in 1937, roller derby images from the 1940s, and championship matches in figure skating from the 1950s, dot the exhibits. Vaudeville act pictures from the early 1900s sit near the Skating Vanities traveling roller skating show of the 1940s and 1950s. Speed skating troops from 1913, 1915, and 1920 showcase early speed racing. Roller derby in the 1950s exemplifies the popularity of the sport. Roller hockey from the 1920s showcases the primitive nature of its equipment and uniforms. Along with the thousands of photographs not on display in the archives, these roller skating photos portray the sport in ways words cannot.
In addition to the photographs, costumes line the display gallery as well. A chronological display showcases figure skating costumes starting in the 1950s and travels through the present. There are speed skating uniforms from 1907 and 1966 displayed. Roller hockey jerseys of today are paired with roller hockey outfits from the 1960s. A dress from headliner Gloria Nord highlights a display on the traveling roller skating show of the 1940s known as the Skating Vanities. Miss Arizona 1989 roller skated to “Amazing Grace” during the talent portion of the Miss America pageant; the outfit she wore is on display at the museum. Tara Lipinski, former Olympic Gold medalist in ice skating, began her career on roller skates; her national championship winning costume from 1991 hangs on permanent display.
While costumes, photographs, and skates are the main items showcased in the museum, other pieces help bring alive the idea of roller skating to visitors. There are six paintings showcasing skating couples. Also shown is an original 1870s lithograph from Jules Cheret, known as the father of poster art, depicting a Parisian roller rink. Skate boxes and trophies line the tops of each display cabinet. The archival room houses complete collections of many roller skating magazines and newspapers; it also includes books, rink stickers, patent papers, programs, medals, postcards, board meeting minutes, posters, patches, and toys. The USA Roller Sports Hall of Fame lines the entrance to the museum and features athletes, coaches, and distinguished service members.
With over 200 years of history, the National Museum of Roller Skating reminds everyone of a great American pastime. For more information visit www.rollerskatingmuseum.com.

What do you think of the history of roller skates?