Southwestern Indian Rings: Souvenirs and Art – The Journal of Antiques and Collectibles, July 2012 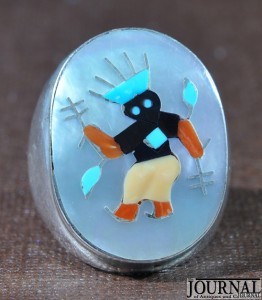 By Paula A. Baxter

When I decided to write about Southwestern Indian rings, mainly Navajo and Pueblo, I was motivated by a key conversation I’d had when I first started collecting. I developed my passion for American Indian jewelry during a business trip to Santa Fe in the mid-1980s. I was an art librarian and never expected to fall so deeply in love with any kind of artistic objects. I was also a new collector without deep pockets. Visiting Scottsdale, Arizona, for the first time shortly after that fateful trip, I consulted Navajo gallery owner Lovena Ohl about my dilemma. She had an immediate reaction. I should collect Indian rings, she said, and make this a focus for building a collection to be proud of. I could search out quality older anonymous pieces, inexpensive and fun tourist work, and even Indian rings by talented young people I thought would be up-and-coming artists.

The collection grew over the years. Now it was time for me to writee about these Southwestern Indian rings. The most effective way to make the story interesting, however, meant bypassing previous types of anthropological and art historical studies. Our societal interest in material culture—in things—remains strong these days. More people collect antiques and collectibles than ever before. Therefore, I chose to write about Southwestern Indian rings in the context of design history, since this form of methodology uses object-based investigation.

In the following excerpt from [amazon_link id=”0764338757″ target=”_blank” container=”” container_class=”” ]Southwestern Indian Rings[/amazon_link] I explain near the beginning how the book’s approach is meant to be. I wanted to depart from conventional value judgments when dealing with a craft that turned into an art. One of the most fascinating things about American Indian jewelry-making is how so much of it was aimed at cultural outsiders. Indian rings were a special souvenir that non-Indians could take away as a token of another culture. Considering that the American Southwest was a major ethnic arts marketplace and a tourist destination, the design history of Southwestern Indian rings made in this region would prove interesting indeed:

This book employs an existing methodology described in a significant treatise on the material culture study of objects. Southwestern Indian Rings can be considered both art works and artifacts produced according to three critical conditions: craft, culture, and individualist privacy. In addition, the text will also assess the impact of popular culture on the production of this specific Indian jewelry form.

Craft refers here to traditions that are indigenous and acquired. Silversmithing was a craft keenly appreciated by Native peoples. They eagerly resorted to sensible solutions like tufa casting and the punch and drill work learned from Mexican plateros in the decades before electricity and sheet metal. Each improvement in technology was used to facilitate further design innovation. Greater access to mainstream jewelry-making processes after World War II allowed jewelers additional means to broaden their craft.

Culture applies to the cultural conditions that underlie Southwestern Native groups, and their prevalent attitudes, customs, and beliefs. This approach means taking into account essential differences between the Navajo and Puebloans. Navajo culture was impacted by their later arrival in the Southwest, nomadic tendencies which permitted easy adoption of the horse, and a burgeoning population requiring the use of more tracts of land. The Pueblo people were rooted in specific community locations, repressed by Spanish colonials, and forced to take their religion and ritual practices underground. Both cultures possessed deep spiritual beliefs that shaped their observation of nature and society.

Southwestern Native cultural beliefs held elements counter to beliefs from non-Native society. Cultural perceptions could be altered through such factors as whether individuals were raised traditionally or outside the reservation. These factors also include the effects of intermarriage between tribes, interracial marriages, and different types of child rearing over the course of the twentieth century. Less clear is whether cultural considerations explain a pattern of recurring multi-generational family talent. For example, what can be learned from the fact that the Zunis have produced such a widespread concentration of inherited artistic ability within their population?

Privacy refers to the unique psychological makeup of the individual who creates an object, a person who is likely to have surface beliefs and submerged beliefs. These ideas may not reveal themselves when a design is created, but they can become detectable in the style or way the object is made. Privacy affects the person who designs when his (or her) main intention is to please the consumer or to please himself. Many people could argue at this point that this is one of the critical distinctions between an artisan and an artist. Since people are a product of their time and place, each new generation develops differing reactions to popular culture.

When craft, culture, and privacy (or individuality) are used to track design history, these qualities are manifested as visual metaphors which appear in a finished design. Therefore, our artifacts—Southwestern Indian rings—are the product of human intentionality, conditioned by the existence of previous objects. These rings function as a link to human material culture. They are ornaments for the body, in this case the hand, and represent a jewelry form shared by most cultures, non-western and western, back to the mists of antiquity.

The story of how Southwestern Indian rings became popular with non-Native consumers and collectors reveals much about the nature of the American Indian art market and its collectors. Through every decade of the unfolding story, Indian jewelers experienced significant changes in practices, materials, and outlook. Indian jewelry-making undeniably transformed from a craft to a full-fledged art in terms of perception and creation by the last quarter of the twentieth century. The critical decades for this revolution were the 1970s and 1980s.

Every time Southwestern Natives made changes, their designs came from within through artists’ self-conscious aesthetic choices and from without by alterations in the world around them. Interestingly, a visit to department stores’ jewelry counters today reveals a wealth of mainstream commercial forms and designs that consciously or unconsciously imitate Native prototypes, from decorative finger rings to cuff bracelets. Modern design is a river with many tributaries, and Southwestern Indian adornment has become an influential current in that river.

This influence began when Native artists decided not to simply copy a design that already existed, but to seek new solutions by means of new designs. Illuminating these changes in the design process is the object of the chapters that follow. When that process seems to be hidden from view, it helps to assess what decisions go into methods of design. These critical choices include how rings were used by their wearers, availability of materials, fashionable trends, and how these methods were the product of conscious human decision at a specific point in time. In other words, this means understanding how Native artists in the American Southwest were affected by the psychological factors of imitation, emulation, competition, conservation, and, above all else, consumerism.

As we review the historical development of ring-making, that elusive quality known as “style” appears regularly. Initially, style meant the visual aesthetic expression of one particular Southwestern Indian group. Later on, style came to be a means of identifying types of designs or materials, such as cluster stone settings. Definite changes in style over time—putting aside the forced design of curio rings—clearly show changes in craft, tradition, and individuality. During the period when non-Native jewelry promoters saw themselves in control, they sought to associate distinct styles with tribes, e.g. Hopi style, Navajo style. While this association worked to some extent, it was an artificial construction just waiting to be broken, and soon it would be.

By the age of pan-Indianism, tribal styles had become outdated and limiting. A major problem for Native peoples was outgrowing non-Native assumptions about their artistry, especially when non-Natives had long been faithful supporters of their arts. At the same time, many Indians possessed pride in the older styles of their elders and of earlier generations; jewelers and smiths wanted the option of creating revival styles that paid tribute to this older work. Now, the forces of craft, tradition, and individual privacy meant individuals designed works with deliberate rather than unconscious references to the past. Other jewelers active after 1980 absorbed art school training, travel, and appreciation for the avant-garde aspect of the mainstream art world outside the existing ethnic art market. They respected their cultural traditions as a legacy, but most wanted what they created to be a reflection of their own individuality.

The history of Southwestern Indian ring design will be examined in the following pages as an activity with a social and material context. Since people are all affected by design through direct and indirect means, design imagery tugs at conscious and unconscious human memories. The chapters in this book follow a chronological progression in the craft of the ring and its journey into an enduring art form.

Note: The book consists of chapters devoted to the chronological development of rings. Ring construction techniques and materials are examined, with innovations pointed out when appropriate. Historic rings were made between 1870 and 1930, when smiths learned metalworking from Mexicans and European American settlers and soldiers. The press of commercialization after 1900 made the age of vintage rings, 1930-1979, a time of experimentation with design motifs and forms. Master innovators, especially men like Kenneth Begay and Charles Loloma, brought new treatments to rings and other jewelry forms. They also helped train and educate young artists in a manner that still resonates to this day. The period from 1980 to the present is marked by artistic accomplishment. More than 350 color photographs illustrate this book, including rings from museums and a large number of dealer and collector contributors. All photographs are courtesy of Barry Katzen.

What are your thoughts on Southwestern Indian rings?

Turquoise: The Jewel of the Southwest