By Suzanne Corbett
When Robert and Virginia Campbell’s last surviving child, Hazlett Campbell, died at the age of eighty in 1938, many thought the Campbell’s palatial old townhouse that graced St. Louis’ once-fashionable Lucas Place neighborhood would pass away with him.
The Campbell House had been willed to Yale University in honor of Hazlett’s late brother James. The homes’ treasure trove of artifacts was willed to surviving Campbell cousins who chose to auction its entirety at Selkirk’s, a local auction house.
Today, Campbell House represents a virtual time capsule, thanks to last generation of the family, who made few changes to the home. Their actions unknowingly preserved one of America’s most complete examples of an American Victorian-age townhouse. Preserved within the house are original furnishings and household items: everything from rare art, furniture, and books to dishes and dresses.
The jewel of the Campbell House collection is a series of sixty period photographs dating from 1885 that illustrate every room with multiple views, including the dining table dressed for a grand dinner. The dining room photos illustrate the typical table decor of the wealthy at the height of the Gilded Age, similar to the table dressings that would 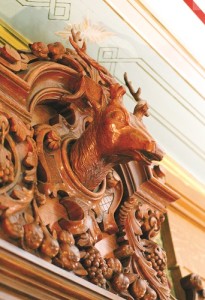 have been used for the Campbell’s 1873 dinner held for President Grant after his election to a second presidential term.
From these important artifacts, along with family history and documented newspaper reports, the museum is able to recreate the grandeur of mid- to late-nineteenth century St. Louis and the Campbell’s elegant dining style and traditions. The collection reflects the lifestyles of Robert and Virginia Campbell and upper-class society from the antebellum period through the Gilded Age, a time when social status and prestige were defined at the dinner table.
Newspapers often reported dinners as a small gathering of ten with “high decorations.” Among the reported high decorations was the Campbell’s ornate Rococo revival silver epergne, an elaborate three-armed piece with crystal bowls that can be separated into three pieces decorated with leaf and grape motifs and the Campbell family motto and coat-of-arms. Accounts of the evening’s dinners described the table decorated with the silver epergne filled with fruits, confections, and flowers with candelabras flanking the tabletop.
As tabletop decor grew in popularity so did the fashion of creating elaborate table displays. Great thought was given to table decor with hostesses working hard to out-do their peers. One such example of over-the-top table decorations was a yuletide dinner hosted by Campbell relatives. The dining table decorations comprised a re-creation of a large stylized version of Santa and his eight reindeer made famous by artist Thomas Nast, which covered the center and length of the table. Ample garlands and flowers completed the design. After dinner, guests were invited to take one of the reindeer home as a remembrance gift of the evening.
Elaborate multi-course feasts were orchestrated with great attention given to detail. Dinner productions could easily rival a night at the theatre or opera, becoming the vehicle of choice for society entertaining and the best way one could impress. To obtain an invitation to such a dinner could become the tool to improve ones social ranking, especially if the invitation was given in honor of a special guest or dignitary.
The press coverage of these private dinners helped spike public interest in how the wealthy entertained. One such event occurred on October 9, 1874, when the local newspapers reported the Campbell’s hosted a dinner for President Grant providing a twenty-course dinner costing an estimated $1,000 (almost $20,000 in 2015). 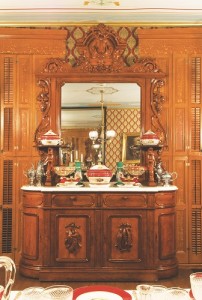 At the Campbell table everyday dinners would likely include a soup course. Soup was followed by the main course, accompanied by sides of vegetables, an occasional salad course, and sweets, cheese, or fruits. David Davis, who had also been an invited guest to a Campbell dinner party, described one late-night Campbell dinner for business associates served at 10 p.m. as an oyster supper. Davis, a close friend of Abraham Lincoln, mentioned both the supper and dinner party in a letter to his wife dated November 21, 1861, which noted the courses served: “. . . soup, fish, then turkey, shin venison, then quail, then ice cream, then nuts, raisins, etc. – everything was got up in the most luxurious style. The course intensified with all kinds of wine including champagne.”
Visitors to the Campbell House during Christmas often recalled the lovely decorations, the Christmas tree, and boxes of candy always on hand to be presented as their gifts. These candy gifts often found their way in the hands of children: employees’ children, neighborhood children, and those children forced into orphanages or church-sponsored homes. In 1905 alone the Campbell’s expenditures at Busy Bee Candy reached $1,500, an enormous amount considering the price of candy at the time was twenty-five cents a pound.
The Campbell’s gilded dining table celebrates the history of a family whose story helped define the age and transcends the recipes that fill a plate. It’s a story underscored with culinary history that continues to fuel interest in the great table traditions and kitchens of the past, and, of course, glorious plates of food.
Built in 1851, the first house in the elegant Lucas Place neighborhood, the Campbell House was the home of renowned fur trader and entrepreneur Robert Campbell and his family from 1854 until 1938. The museum contains hundreds of original Campbell possessions including furniture, paintings, clothing, letters, carriages and a unique set of interior photographs taken in the mid-1880s.
The Campbell House was documented as part of the Historic American Buildings Survey between 1936 and 1941, designated a City of St. Louis Landmark in 1946, listed on the National Register of Historic Places in 1977, and became a National Trust for Historic Preservation Save America’s Treasures project in 2000. The Campbell House Museum is owned and operated by the Campbell House Foundation, Inc. campbellhousemuseum.org

The Gilded Table at the Campbell House