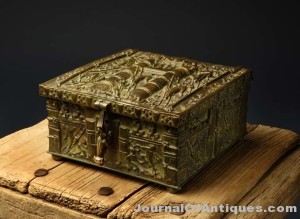 Perhaps you have heard the story of Forrest Fenn, the New Mexico millionaire who has hidden a treasure chest somewhere in the Rocky Mountains. The chest holds gold coins, gold nuggets, gold dust, Pre-Columbian animal figures, rubies, diamonds, hammered gold mirrors, a Spanish ring from the 17th century, jade Chinese faces, and antique emerald and ruby jewelry—and one other thing: Forrest Fenn’s autobiography. Fenn published The Thrill of the Chase, his autobiography, in 2010, and in it, he included a 24-line poem as a map to the treasure (see below).
The first question that comes to mind, is why? Why did he load 20.2 troy pounds1 of gold along with jewels and antiquities into a 10 x 10 x 5-inch bronze chest and hide it for someone to find?
“I hid it for several reasons,” Fenn responded recently via email after agreeing to this interview. “I thought I was dying of cancer and wanted others to have the thrill of the chase looking for treasures as I have for so many years. Another reason was to get families, kids particularly, off the couch, out of the game rooms and into the mountains to smell the sunshine. A third reason was to give a sense of adventure to those who are having a hard time in this recession. I could have given the money to a few people to help them, but by hiding the chest, I am giving thousands of people the opportunity to find a treasure at the end of their own rainbow.”
Before he retired, Forrest Fenn made his fortune selling art and antiquities in Santa Fe, New Mexico. Many times, his gallery drew the famous:  Jackie Kennedy Onassis, Steven Spielberg, President Gerald Ford, Ralph Lauren, Michael Douglas, Steve Martin, Suzanne Somers, Donald Rumsfeld and others.
Fenn has sought treasure in one form or another ever since finding an arrowhead as a boy while exploring with his father. He grew up in Texas in humble circumstances, but he grew up to become a combat pilot in the Air Force. Serving in Vietnam, he earned a Silver Star, three Distinguished Flying Crosses, a Bronze Star, 14 Air Medals and a Purple Heart. He was shot down twice by ground fire.
Before Vietnam, other duty stations overseas in the 1950s and ’60s gave him many antiquity-finding opportunities. In addition to the United States, Libya, Germany and Italy, Fenn has ventured to the Amazon Jungle in Brazil, “…where I traded knives and fish hooks to the natives. I traded cigars to Montagnard villagers in the Highlands of Vietnam for antique crossbows and arrows. I also traded tobacco to a Viet Cong prisoner of war for sandals he had made out of a truck tire.” 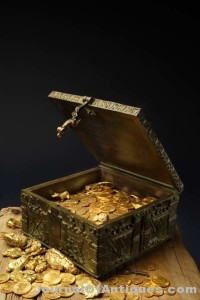 While in Italy, Fenn made discoveries in Pompeii. “I took the train from Naples to Pompeii. A friend’s father, who was a curator at the ancient ruins, gave me tacit permission to climb over a low wall and into a 2,000-year-old backyard. I dug in the sharp volcanic cinders with my gloved hands. A security guard spotted me and took me to the curator’s lab where we sipped ‘wine’ from the ancient amphora I had uncovered. It tasted like decayed vinegar.”
In Africa, Fenn explored more historic sites. “I searched the ancient Roman ruins of Sabratha and Leptis Magna on the Mediterranean in Libya and photographed the huge stone mosaics and collapsed pillars of marble. In the Sahara, I found ancient stone projectiles in close proximity to burned tanks and other relics left over from WWII. Wars were lying on top of wars.”
Fenn maintains that his treasure can be found when starting at the right point.
He has said some have gotten close, but close doesn’t count in treasure hunting.
“A number of searchers have been within several hundred feet of the treasure.”
In addition to the poem, Fenn has given a few more clues:
• The treasure is buried above 5,000 feet
• It is not buried in a building or an outhouse
• It is not buried in Utah or Idaho
• It is not buried in a graveyard
Thousands of people have searched for the treasure (including a woman from Georgia who recently drove to Montana to look for it), and some have pestered him for clues. What has been Forrest Fenn’s reward in this adventure?
“My rewards have come from a few thousand emails from those who have searched the mountains with family and friends. Sons have been reunited with their fathers (in one case after 19 years without speaking). One teenager said she lost 8 pounds walking up and down the hills, and thanked me.”
The treasure is still waiting to be found. When it is, you will definitely hear about it on the news. Until then, treasure seekers can learn more at www.oldsantafetradingco.com/the-thrill-resource-page.
1 One troy pound = 14.58 troy ounces; 20.2 troy pounds = abou


The Poem
As I have gone alone in there
And with my treasures bold,
I can keep my secret where,
And hint of riches new and old.
Begin it where warm waters halt
And take it in the canyon down,
Not far, but too far to walk.
Put in below the home of Brown.
From there it’s no place for the meek,
The end is drawing nigh;
There’ll be no paddle up your creek,
Just heavy loads and water high.
If you’ve been wise and found the blaze,
Look quickly down, your quest to cease.
But tarry scant with marvel gaze,
Just take the chest and go in peace.
So why is it that I must go
And leave my trove for all to seek?
The answers I already know,
I’ve done it tired, and now I’m weak.
So hear me all and listen good,
Your effort will be worth the cold.
If you are brave and in the wood
I give you title to the gold. t 294.5 troy ounces.

Mining Collectables in America: A Study in Mining History