…and Other Holiday Classics
by James Dawson
Christmas was the holiday that was just waiting to happen. For whatever reason, whether it be there to fill a spiritual or an emotional void, it waits for us at the beginning of winter to give us a warm boost into the chilly new year. We moderns may bemoan the fact that Christmas is becoming more commercialized each year, but the origins of Christmas actually predate the birth of Christ by as much as two thousand years which is why Christmas can’t quite decide if it wants to be the continuation of a pagan Saturnalia of feasts and gift giving or the celebration of the Nativity of Jesus Christ.
Despite one network’s annual scares about the so called War on Christmas (which has been around long enough to become a Christmas tradition as well), that’s not new either. Christmas was not always loved in America. The early Protestants were down on Christmas and the Puritans outlawed it thinking it pagan and celebrating Saints Days – even the birthday of Jesus (the word Christmas is derived from Christ’s mass) reminded them too much of the Roman Catholic traditions that they had just broken from. It wasn’t until the later 1800’s that most Protestant Churches relented and began offering the Christmas services that their congregations wanted. Some Christian denominations still sincerely believe that Christmas is anti-Christian because it is not mentioned in the New Testament.
As for the date being December 25th, by 350 AD, no one remembered the exact date of Christ’s birth, so the powers that were decided that December 25th was as good a date as any. This date was sacred in several early cultures as it was thought to be the winter solstice and the pagan celebrations of it worried the Church Fathers. By taking that date, they could de-paganize the holiday that wouldn’t go away. Actually, scholars say that whenever Jesus was born it was not in December because the shepherds would not have been watching their flocks by night then- they would have been put up for the winter. Some think it was actually in September. Nor was the first Christmas white, nor did Joseph and Mary have a Christmas tree, nor were there any reindeer in the manger and it was the three Magi who brought Jesus gifts, not Santa Claus. 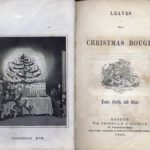 Once Upon a Time There Was Christmas