Guess What Article for June 2007
By Bob Cahn, “The Primitive Man” 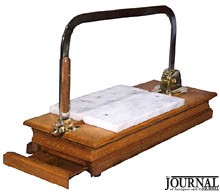 This month’s GUESS WHAT is based on what we like to refer to as the “Stipulation Premise” – wherein we acknowledge and stipulate what it does, but you must figure out what it does it on.

Sometimes it seems simple, but unlike the Olympics – we’re not placing a difficulty level on the challenge. We’ve not come across this particular apparatus in 35 years of searching and dabbling – so it’s not the function that is unique, but how it’s accomplished.

While we’re ranting and raving, did we mention what we’re stipulating? It has a strong, thin wire tautly stretched the length of this over-sized hacksaw-like frame, which hinges at one end in a pressure arc – completing the final action, much like a paper cutter.

This is one of those instances where size does matter. It has an oak base, a slide-out panel to catch small fragments and droppings, two half marble slabs for easy clean-up. (Dimensions: 23 inches long by 9 inches deep by 14 inches high.)

Now for the challenge – what did it cut? Did it segment a key lime pie or separate multiple ravioli pasta squares? Did it slice sourdough bread or a giant loaf of cheddar? Did watermelon get vivisected or celery stalks get reduced in a vertical slimming down process? Maybe cucumbers or tomatoes got whittled to tossed salad size for one-bite mastication? How about brownies or fudge squares – were they candidates for portion control? One last possibility: cutting whale blubber for rendering in early fat lamps.

The parade of choices has ended. Tune in next month for the revelation. Till then!*

* From the interesting inventory of Ed and Barb McCann Antique and Collectibles, Crestline, CA.

Answer to May’s Guess What?

The whole tomato started at one end, cradled in a pocket or chamber and was pushed through a parallel series of cutting blades; voila, sliced tomatoes at the opposite end.*

Moss: The Lamps That Spin

The Tradition of Heirloom Seeds

How to Value an Aladdin Lamp in Today's Market