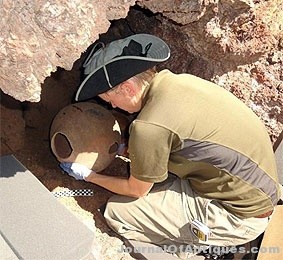 U.S. Border Patrol agents looking for signs of illegal immigration in the mountains of southern Arizona stumbled on a most unusual find: several intact ancient Native American pots believed to be hundreds of years old. The reddish-brown pots were likely used for storing food and water, and were found sitting on the surface of sandy soil, undisturbed since they were placed there by human hands. The fact that they were intact is remarkable in itself, since most Native American pot finds are little more than shards.