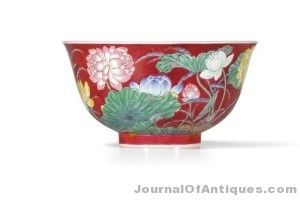 A Chinese “lotus bowl” made between 1662 and 1722  and measuring just 3 inches in diameter by about an inch and a half tall, sold for $9.5 million at an auction held Apr. 9th by Sotheby’s in Hong Kong. It was a new world record price for a Chinese Kangxi ceramic. The ruby-ground, double-lotus “falangcai” bowl – decorated with pink, yellow and blue lotuses – was bought by Hong Kong antiques dealer William Chak. It had been sold twice before at auction – for $68,000 in 1983 and $1.54 million in 1999.