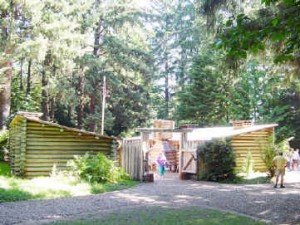 A replica of the fort in Oregon where Lewis and Clark spent the winter of 1805-06 has been destroyed by fire, and authorities are calling it suspicious. They are looking for a truck seen leaving the area just as firefighters arrived. The replica, built 50 years ago, is of Ft. Clatsop, at the Lewis and Clark National Historic Park in Warrenton, Ore. The fire occurred about five weeks before a bicentennial event was scheduled to be held there. Park officials said the fort replica will be rebuilt.
The country is nearing the end of a two-year national celebration of the explorers’ journey west. When the expedition reached the Pacific Ocean in November 1805, it pitched camp at Ft. Clatsop and wintered there. The 50’ x 50’ replica fort was built in 1955 to mark the sesquicentennial of Lewis and Clark’s journey. It was built near where experts believe the original fort stood and was based on drawings and descriptions in the men’s journals. The area later became the city of Astoria.
[amazon_carousel widget_type=”SearchAndAdd” width=”550″ height=”200″ title=”More on Lewis and Clark:” market_place=”US” shuffle_products=”False” show_border=”False” keywords=”Lewis and Clark” browse_node=”” search_index=”Books” /]