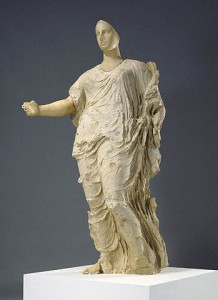 The J. Paul Getty Museum in Malibu, Calif. — which houses more than 40,000 antiquities, most of them from classical Greece and Rome — is about to re-open following completion of a six-year, $275 million renovation. But there will be someone notably absent from the grand re-opening: Marion True, the Getty’s former curator. True had to resign earlier this year amid allegations that she conspired with European dealers to traffic in looted ancient artworks. She denies any wrongdoing.
An investigative piece in the L.A. Times showed that True and other Getty officials had suspected for a long time their suppliers were probably selling looted antiquities, but they bought them anyway. Dozens of pieces in the museum are in dispute, including a statue of Aphrodite (shown), dating from 400 B.C. Authorities say it was stolen from Sicily before the Getty bought it in 1988 for around $18 million. It’s a huge embarrassment for the Getty, long the envy of the museum world.
[amazon_carousel widget_type=”SearchAndAdd” width=”550″ height=”200″ title=”More about the Getty Museum:” market_place=”US” shuffle_products=”False” show_border=”False” keywords=”Getty Museum” browse_node=”” search_index=”Books” /]

“Antiquities: The Subject of New Regulations.” How this will affect what you buy and sell