The Real Bottom Line, The Business of Doing Business in Antiques, The Journal of Arts and Collectibles –  September 2002
I bought this antique helmet at auction for $900 plus $90 buyer’s premium. However, $990 is not the total amount of money I have invested. 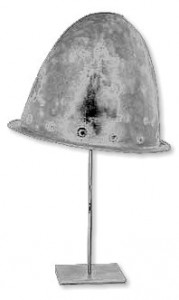 I first saw the helmet a week before the auction. In my opinion, it was not a reproduction. It was in excellent condition for an iron antique that could be three or four hundred years old. The helmet brought to mind a painting by Rembrandt in which the setter was wearing a similar but much finer crafted helmet.
The following morning, I called a dealer in northern Maine who specializes in Colonial American arms and armor. Based on my description, he guessed that the helmet was most likely a Spanish Morian, more correctly called a Cabasset. He further stated that cabassets have been excavated at an early 17th-century site in Yorktown, VA. Similar cabassets were also excavated near Jamestown.
He added that the style was introduced in the early fifteen hundreds and discontinued around 1620. Cabassets made between 1500 and 1560 were swaged from one blank of steel. Cabassets made between 1560 and 1620 were swaged from two blanks of steel and then forged together. I arranged to visit his home for more information and for copies of documents and book pages related to cabassets.
I called a collector in Tennessee who confirmed that the helmet was most likely Spanish. This collector asked about a razor-sharp sliver of steel on the top of the helmet called an “Apical Peak.” This razor-sharp sliver of steel and a small hole in the back of the rim were designed to hold a feathered plume. Soldiers on campaign often heated this sliver of steel red hot in a campfire and flattened it to prevent injury to their hands. 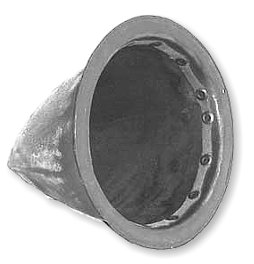 I now had three things to check when I returned to the auction house. Was the helmet constructed of one or two plates of steel, did it have an Apical Peak and was there a hole in the rim beneath this sliver of steel.
The answers to these three questions are: The helmet is constructed of two sheets of steel and therefore dates between 1560 and 1620. The helmet does have and an Apical Peak that was flattened by a soldier who used it. There is a hole in the rim beneath this sliver of steel.
My buying costs for the helmet were: The hammer price at auction of $900, the buyer’s premium, $90, the cost of both long distance telephone calls $29.75, the gas to visit the Maine dealer and to attend the auction, $16.00, and Interstate tolls of $3.40. My total out-of-pocket expense to buy this helmet was $1039.95.
In addition to buying expenses, I will also incur selling expenses. Selling expenses include booth rent, lodging, tolls, table rental, electricity, plus one-half of the cost of the food I eat while away from home.
I figured my selling expenses as a percentage of the cost of goods sold. In my 35 year career, my selling expenses have averaged around 10 percent. My lowest selling expenses were in the beginning days of the Internet auctions when everything placed at Internet auction sold for more than it was worth. My selling expenses for 1994 through 1998 were between five and eight percent. 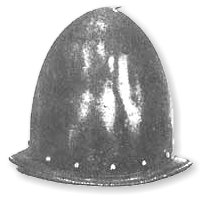 My highest selling expenses were in the years 1988 through 1991. I was doing expensive shows in major cities and the selling was slow. My selling expenses ranged between 15 and 20 percent of the cost of goods sold. Today, my selling expenses are 10 percent. This includes the cost of shows such as booth rent and travel. The ever increasing cost of paying search engines to carry my Internet business website. And, the cost of traveling to buy antiques at shows throughout America and now throughout Europe. I re-calculate my selling expenses after each show and when I have a large expenditure for search engine services.
Ten percent of the money ($1039.95) that I paid for the helmet is $103.99. My total cost for this item, including selling expenses, is $1143.94. If I sell this helmet for less than this figure, I will actually lose money.
Keeping track of total buying and selling expenses can save much money at tax time. Using the example of the cabasset, the income tax savings realized by tracking total expenses is $78.33.
Suppose that a dealer kept no track of expenses and resold the Cabasset for $1500. He or she would have to pay income tax on $510. The income tax on $510 for a dealer in the 22 percent tax bracket is $112.20.
If I resold the Cabasset for $1500, I would pay income tax on $356.06. The income tax on $356.06 for a dealer in the 22 percent tax bracket is $78.33. My net profit after expenses and taxes would be $277.73. This is certainly not enough return on my investment.
Two days after completing the first part of this article, I received a phone call from an interested buyer from Texas. He heard about my cabasset through the Tennessee collector. He asked that I describe the “Armory Marks.” He explained ocations I should look to find such marks. I found the mark, a crown over a shield. However, the mark turned out to be a “City Arnisal Mark.” According to the Texas dealer, I also should find armory and makers marks. He offered $1200.00 for the helmet.
How much should I mark-up this item? I do not own or use price guides. Even if I did, this helmet is so rare that price guide references would not be accurate. I do have four opinions to give me some guidance. The Maine dealer thinks that I paid twice what the item is worth. The Tennessee collector is willing to give me a small profit. The Texas dealer offered $1200.00.The under bidder was willing to pay $935. Unfortunately, the bidder was a phone bidder. I could not judge if the bidder was emotional or bidding with the calm certainty of a professional buyer.
How much profit is a dealer entitled to?The honest answer is, as much as he or she can get. I once bought a sleeper for $15 that sold for many thousands of dollars. Should I have sold this item for less because I bought it cheap? The correct question for a dealer to ask is how much do I need to mark up what I buy in order to make enough money to run a viable business.
I used to teach a course, “The Business of Doing Business in Antiques.” The course was designed for beginners. However, most of my students were part time and hobbyist dealers who had been in the business between three and five years. The week we spent on mark ups was a long week for me as the instructor. Several volunteers would bring in their purchase and expense records for the class to analyze. The two hour class, 7 until 9 PM, lasted until midnight and sometimes later.
The bottom line was always the same. Most dealers do not mark up their merchandise enough to maintain a viable business. And, the necessary mark up was always much higher than the dealer expected.
The cost of this helmet is above the amount that most impulse buyers will pay. The buyer will be a dealer or collector who knows exactly what he or she is buying. How much will such a person pay? My guess is $1800 to $2500. Is my assumption overly optimistic? The answer is that I do not know.
I base this estimate on two pieces of body armor and a weapon of the same age that did sell around this price.
Is a 16th century cabasset worth the same or less than a 16th century Breast Plate or a 16th century Boar Spear?
I will try to sell the helmet for $2500 or as close as I can get to this figure. With this amount, I am within the margin of mark up I need to maintain my business.

How Accurate are Appraisals?