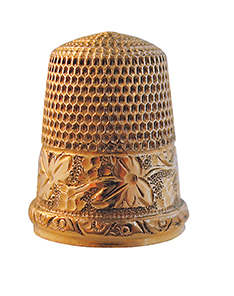 By Bridget McConnel It is useful to have some idea of the history and the earliest known examples of needles, awls, pushers and thimbles to understand why people collect thimbles – a rather insignificant industrial device to stop fingers from becoming pin cushions. Sewn work appears as early as ca. 30,000 b.c. on the Cro-Magnon […]

END_OF_DOCUMENT_TOKEN_TO_BE_REPLACED

Ken’s Korner: British Museum pays $630,000 for rare coin – The Journal of Antiques and Collectibles – April 2006 The British Museum has paid a little more than $630,000 for a rare, 1,200-year-old gold coin dating to Anglo-Saxon times. It was the most ever paid for a piece of British money. The coin depicts King […]