One of the Most Iconic Weapons in Film History Highlights Return of the Jedi’s U.S. Art Director’s Historic Production Archive 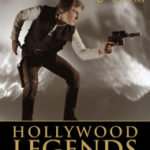 Los Angeles, California – (April 26, 2018) – Julien’s Auctions, the world record–breaking auction house, has announced that Harrison Ford’s “Han Solo” hero blaster movie prop used in the original Star Wars trilogy film Episode VI: Return of the Jedi (Twentieth Century Fox, 1983) will headline their blockbuster Hollywood auction of the year, HOLLYWOOD LEGENDS taking place June 23, 2018 in Planet Hollywood Resort & Casino in Las Vegas and online on juliensauctions.com. This sale of one of the most iconic sci–fi weapons in the history of film comes upon the 35th anniversary of the release of the film that became a pop culture touchstone and will highlight the exhibition and sale of the never before seen by the public collection of “The James L. Schoppe Star Wars: Return of the Jedi Production Archive.” The blaster is estimated to sell between $300,000–$500,000 and is offered for the first time at auction.
Actor Harrison Ford, who played Han Solo, is seen using this blaster in many scenes throughout Return of the Jedi. The original production used BlasTech DL–44 blaster prop weapon was custom made specifically for the film, built on a metal working non–firing model version of a Mauser C96 Broomhandle with additional found parts, greblies and cast resin pieces added on.
One of three Han Solo blasters made for and used in Return of the Jedi, the production had used one hero “practical” version and two hero “non–firing” versions. Julien’s Auctions Hollywood Legends auction event will offer one of those two hero “non–firing” movie prop weapons made for and used in the film.
Once production was completed, the film’s Property Master Peter Hancock presented the U.S. Art Director James L. Schoppe with the Han Solo blaster and a few other props. Schoppe has kept this blaster and his massive memorabilia archive for the past 35 years.
During the course of his work on the production, Schoppe saved a massive archive of production photographs, blueprints, memorandums, meeting notes and correspondence, script pages, call sheets, maps, illustrations, schematics, press clippings, and other memorabilia, as well as a few props that were gifted to him from Hancock. The Han Solo blaster, accompanied with a Letter of Authenticity from Schoppe as well as production documents related to its provenance, is just one of the incredible lots that will be offered for auction in the Julien’s Auctions Hollywood Legends event with more items and details to be announced.
Schoppe served as the Art Director on the film for multiple locations in the United States including the Tatooine scenes with Jabba the Hutt, the Great Pit of Carkoon, the exterior scenes shot for the Moon of Endor in the forests for Ewok village and more. Schoppe was nominated for an Academy Award in the category Best Art Direction for his work on Return of the Jedi.
“Julien’s Auctions is thrilled to discover this rare and important piece from one of the most influential Hollywood films of all time used by one of film history’s most beloved heroes, Han Solo,” said Martin Nolan, Executive Director of Julien’s Auctions. “The Han Solo blaster is one of the most exciting offerings of genuine Star Wars movie prop memorabilia ever to come to auction given the provenance of this piece coming directly from the Art Director from Return of the Jedi.”