Pressed Glass as Patriotism
Daniel Jay Grimminger, Ph.D.
Since at least the 1820s, North American memorabilia has appealed to the patriotic spirit by portraying the presidents who Americans so dearly loved. Manufacturers of material goods charmed the working class-especially the women, who had control over their parlor rooms that “overflowed with store-bought mass-produced objects, carefully arranged …” These items distributed to the American public were vast. By the time this industry reached its climax in the 1896 election between William McKinley (1843-1901) and William Jennings Bryan (1860-1925), presidential artifacts included “banners, pillows, plaques, tapestries, belt buckles, bandannas, shirts, watch fobs, canes, paperweights, ashtrays, cigar holders, match safes, mugs, plates, trays, bracelet charms, spoons, rings, soap ‘babies,’ razors, mirrors, and other items bearing the names or likenesses of the Republican and Democrat standard bearers.” Out of all of the thousands of presidential mementos, pressed glass has remained one of the most coveted for its clear and beautiful portrayal of the commanders in chief and the nationalistic attitude that they inspired. 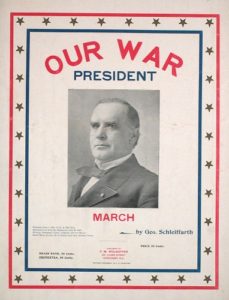 Presidential glass was a unique genre of pressed glass that appealed to patriotic Americans. It provided a visual undergirding in the home to the election of new presidents and the farewell to old ones. It is a commentary on American consumer tastes and fads, and it has left us with a lucid view of how American identity was embodied in the everyday American life. While it is impossible to give more than a contextual introduction to presidential glass here, it is my hope that this preliminary study on the subject will be the beginning for further exploration in the examination of this genre of glassware.


Seeing The Presidents Through Glass