Comic Character Collectibles
By J.C. Vaughn
After setting records with their previous auction, Hake’s Americana & Collectibles looks well on their way to doing it again with Auction #223. The sale, which will close after this issue goes to press, has already been another record-setter for the firm as bids topped the $1 million mark in less than one week. Hake’s previous record for clearing $1 million was in their November 2017 auction, which hit the plateau in 21 days.
The event seemed strongly positioned for comic book and Star Wars collectors in particular. Among the comics, at press time, a CGC-certified 5.0 copy of Detective Comics #27, the first appearance of Batman, had reached $357,000. Other top issues included Action Comics #7 CGC 4.0 (with the second cover appearance of Superman), More Fun Comics #52 CGC 3.0 (with the first appearance of the Spectre), and Captain America Comics #3 CGC 7.0 (with Stan Lee’s first comic book work).
The first appearance of Batman is very likely to be the bellwether of this auction. The story in 1939’s Detective Comics #27 by Bob Kane and Bill Finger introduced the Caped Crusader. A CGC-certified 8.0 copy was the first comic book to top $1 million when it sold for $1,075,000 at Heritage Auctions in 2010. That was a mere three days after a CGC 8.0 Action Comics #1 became the first to sell for $1 million.
Since then, Action Comics #1 has outpaced Detective Comics #27, but looking at the data one might rightly wonder why this is so.
Of the 67 copies on the CGC census to date, only 32 of them have been certified as unrestored, as has this copy; 34 of them have had restoration work done (the outlier is one copy listed as “Qualified,” which denotes a better appearance than the actual results of grading, often suggesting a major defect inside the comic). Amazingly, there are fewer unrestored copies and fewer total copies certified than Action Comics #1, the first appearance of Superman (40 universal grade, one qualified, and 28 restored for a total of 69). 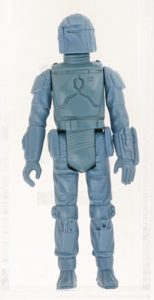 The Star Wars selections are led at this writing by the Boba Fett rocket-firing prototype (L-slot) action figure, Darth Vader 12-back-A double-telescoping AFA 70 EX+, and the Hero Set three-pack Series 1 AFA 90 NM+/MT.
The Boba Fett prototype was the subject of collector discussion, interest, and anticipation even before the Russell Branton Collection arrived at Hake’s prior to their last auction.
“This is among the most desirable and sought-after action figures of any line or any era. It is truly a legendary toy that is on everyone’s radar,” Hake’s President Alex Winter said.
The prototype was on display at the 1979 Toy Fair in New York City, but the figure never went into production in this form because the rocket-firing capability was deemed to be a choking hazard. As a result, the prototypes in circulation are almost all unpainted, blue figures.
Part of a mail-away campaign, people would send in four proof of purchase seals to receive the Boba Fett figure by mail. In response, they’d receive the toy without the rocket-firing ability and a letter apologizing for the change. Some action figure cards had already been produced so stickers were placed over the image of the rocket-firing mechanism on the back.
The original rocket-firing versions are known as L-slot or J-slot, referencing the shape of the firing mechanism on the figure’s back. The one in this collection is the L-slot firing type.
“The great early success of this auction is very rewarding. We at Hake’s are always excited about the incredible material that we handle for our auctions and it’s gratifying to see that our customers are on the same wavelength,” Winter said. “Obviously Detective Comics #27 leads the way, as expected, but the initial bidding on many different items has been hot and heavy, from comic books to Star Wars.”
We’ll definitely have details on the results next issue.
In the meantime, Hake’s sister company, Diamond International Galleries, is graduating from eBay-only to its own auction website, digauction.com. Its first event happens as this issue is put in the mail, and auctions will continue weekly from that point. The offerings will include comic books and other comic character collectibles. The site welcomes new bidder registrations.
Mike Mignola Exhibit at Society of Illustrators
Running through April 21, 2018, the Museum of Illustration at The Society of Illustrators in New York hosts The Art of Mike Mignola: Hellboy and Other Curious Objects, a selection of works from the writer-artist behind the award-winning Dark Horse Comics series Hellboy.
This special exhibit will include an array of comic pages, covers, and rarely seen original paintings by Mignola, who also designed Disney’s animated film Atlantis.
Along with this exhibit, Mignola will also be a guest of honor at this year’s MoCCA Arts Festival April 7-8. This two-day multimedia event, Manhattan’s largest independent comics, cartoon and animation festival, will include speaking engagements, book signings, and parties. 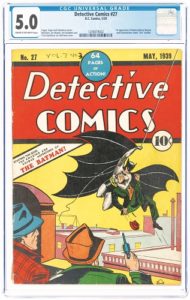