, was $277,300, for a No. 68 astronomical regulator  also at Fontaine s.
The Nov. 14 auction was packed with 475 lots of rare and vintage clocks, watches and various other unusual and desirable timepieces, made by some of the most renowned names in horology. Also featured were original paintings, sterling silver, furniture, estate jewelry and lamps by makers such as Tiffany Studios, Pairpoint, Handel and Duffner & Kimberly, plus other items.
The E. Howard No. 43 was the undisputed star lot in an auction that grossed about $1.5 million. The clock had a 14-inch reverse painted glass astronomical dial with a sweep minute hand and five-hour numbers, housed in a beautiful carved walnut floor standing case with a shell carved crest over a figural maiden’s head. Jars were made by the Boston & Sandwich Glass Company.
Over 1,200 people participated in the auction, with 100 people attending live and in person, and 920 others registering to bid online, via LiveAuctioneers.com, Invaluable.com. and eBay.com. In addition, nearly 150 phone bidders kept Fontaine s staffers busy throughout the day, and about 75 absentee bidders helped round out the day s tally.  In all, it was a great sale, with Howard clocks, French clocks, mystery clocks, Tiffany lighting and estate jewelry all bringing high prices, said John Fontaine of Fontaine s Auction Gallery.  The mid-level merchandise held its own but, as expected, the truly great items carried the day. 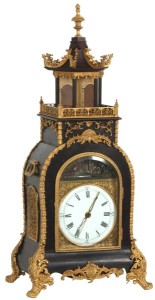 Additional highlights from the auction include (all prices quoted include a 21 percent buyer s premium):

Tops in the jewelry category was a Cartier platinum and pave set diamond ring in the form of a panther cat, with emerald green eyes, in the original box ($30,250). Silver was led by a Russian silver samovar (highly decorated tea urn) by Mikhail Ovchinnikov, 19 inches tall ($12,100). As for bronze, a relief bronze figural nude of a woman by Maollol (Fr., 1861-1944), rose to $10,890. Tiffany lamps were a huge attraction for bidders. A Gold Turtleback table lamp with an 18-inch diameter shade having a geometric brick background went for $24,200; a Red Acorn table lamp with 16-inch domical shade, also with geometric brick background, realized $18,150; and a Green Damascene double student lamp with a pair of 10-inch damascene shades fetched $9,680.In the furniture category, a carved rosewood turtle-top marble-top parlor table attributed to Alexander Roux, with a fine French polished finish, topped out at $12,100.
For more information about this auction, past auctions, or to inquire about consigning items to a future auction, visit www.fontainesauction.com or contact John Fontaine at  (413) 448-8922; or info@fontainesauction.com.

State of the Clock Market