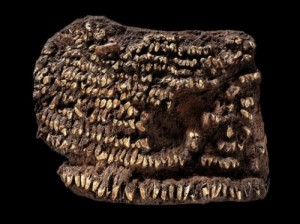 Excavators working near Leipzig, Germany have unearthed more than 100 dogs’ teeth, all arranged together in a grave dating to between 2,500 and 2,200 B.C. Archaeologists agree the teeth were likely decorations for the outer flap of a handbag (no actual leather or fabric was found; it had long ago disintegrated). Remarkably, canine teeth are actually rather common in Stone Age northern and central European burials. In other areas Stone Age burials, dog and wolf teeth, as well as mussel shells, have also been uncovered in patterns.
These patterns suggest that corpses were once covered with studded blankets. More commonly, though, dog teeth are found in hair ornaments and necklaces, for both women and men. But not everyone was buried with such nice things, only people of privilege or importance. The German find was made at a 250-acre dig site that has already yielded more than 300 graves, hundreds of stone tools, spear points, ceramic vessels, bone buttons and an amber necklace. One woman from around 50 B.C. was buried with a pound of gold jewelry.