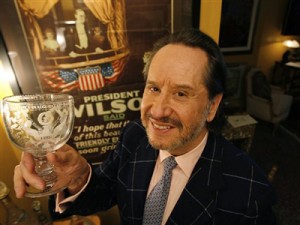 Barry Landau, 64, of New York (shown), has admitted to stealing thousands of rare and valuable documents from historical societies and archives over a ten-year period and has been sentenced to seven years in prison for his crimes. Landau, a presidential memorabilia collector, admitted to swiping copies of speeches that Franklin D. Roosevelt read from during his three inaugurations; a large land grant signed by Abraham Lincoln in 1861; letters written by such notable figures as Isaac Newton and Charles Dickens; and other items.
Landau had an accomplice – Jason Savedoff, 25, an assistant who is awaiting sentencing. The pair would visit archives and often distract staff while stuffing rare documents into secret pockets in their clothing. They attempted to cover up the thefts by removing card catalog listings for the items and using sandpaper and other techniques to remove museum markings. They called this process “performing surgery.” Over 250 items belonging to Betty Currie — Bill Clinton’s White House Secretary — were found in Landau’s residence.

Secret Storage: Exploring the Hidden Side of Antique Furniture