Ken’s Korner: Royal French hairpin is found — in a toilet – The Journal of Antiques and Collectibles – September 2012 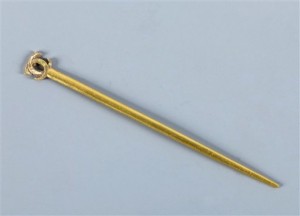 Archaeologists digging at the Fontainebleau Palace, a royal residence just outside Paris, have made a most unusual find: a hairpin belonging to 16th century French Queen Catherine de Medici, bearing interlocking C’s standing for Catherine. It isn’t so much what they found but where they found it – down a communal toilet, where the archaeologists were working on a restoration. What was the 9-cm royal hairpin doing there? No one knows. But it’s the first time a possession of the Renaissance royal has ever been found at Fontainebleau Palace.