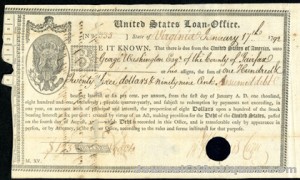 A historic U.S. federal bond, issued to and signed by then-President George Washington in 1792, the first year such bonds were traded on the New York Stock Exchange, sold for $265,500 at a two-session auction held Oct. 19 (in New York City) and Oct. 22 (in Fort Lee, N.J.) by Archives International Auctions, based in Fort Lee. It was the most ever paid at auction for a U.S. scripophily item. Also, an early Edison stock ticker hit $8,850; and a stock certificate signed by Buffalo Bill Cody brought $2,360. Prices include an 18 percent buyer’s premium.