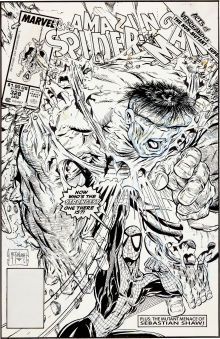 Beverly Hills, CA – The best of both worlds in comics and original comic art met in Heritage Auctions’ World Record-shattering $10.47+ million Signature® event on July 26 and 27 in Beverly Hills, Calif., breaking its own world record auction of nearly $9 million from just last February.
“We just reset the bar for this category and Heritage continues to deliver, this time with a sell-through rate of 99.9%,” said Ed Jaster, Vice President of Heritage Auctions. “Collectors and comics fans across the board have come to expect Heritage Auctions to continuously redefine the standard, and with good reason, too. We have no plans to stop here.”
The top offering of the day, from the stunning $1.4+ million Shamus Modern Masterworks Collection – Todd McFarlane’s original art for The Amazing Spider-Man #328 (Marvel, 1990), which brought $657,250, the highest price ever realized for a piece of original comic art – drew a collective gasp in the room as the hammer came down, setting off a storm of national media attention. The artwork shows Spidey demonstrating his awesome new powers on the Hulk, lifting him effortlessly with a single hand and smashing The Hulk through his own logo.
“We knew these amazing works of art were going to go high, but the happy surprise was that it was McFarlane’s Spidey #328,” said Todd Hignite, Vice President of Heritage Auctions. “We all thought that McFarlane’s art for 1990’s Spider-Man #1, the best-selling comic book of all time, would be the most contested lot. As it turns out, that piece realized $385,500, a superb price in and of itself without a doubt, but only second in this record-breaking grouping.”
The heart of the auction revolved around the multi-million dollar Doug Schmell/PedigreeComics.com Collection, featuring the single greatest grouping of Silver Age Marvel CGC #1 Registry sets ever assembled. The collection, from one of the most respected dealers and collectors in the business, led by the Pacific Coast pedigree X-Men #1 (Marvel, 1963) CGC NM/MT 9.8, which brought $492,938, realized more than $3.94 million by the time the auction closed.
“I still can’t believe the X-Men #1 9.8 went for nearly went for half a million dollars,” exclaimed Schmell. “It was not an easy decision to sell these prized books, but Heritage made the sale of the collection a very successful one. It exceeded all my expectations.”
“This experience was especially satisfying, because Doug is a true gentlemen and a great friend,” said Steve Borock, Senior Consignment Director at Heritage. “He’s an expert’s expert whose Silver Age Marvel collection was the best of the best. The comics, and their final prices realized, spoke for themselves.”

Further highlights include, but are not limited to:
The Avengers #1 Pacific Coast pedigree (Marvel, 1963) CGC NM+ 9.6: An amazing, high-grade and pedigreed copy of the first appearance of the Avengers, the superhero dream team currently making waves in one of the highest-grossing movies of all time. In its debut incarnation, the team was composed of Thor, Iron Man, Ant-Man, Wasp, and the Hulk – the latter of whom had been framed by the miscreant Loki, leading to the team’s formation. From the Doug Schmell/PedigreeComics.com Collection. Realized: $274,850.
Tales of Suspense #39 Pacific Coast pedigree (Marvel, 1963) CGC NM+ 9.6: This is the highest-graded copy of this Silver Age Marvel key Heritage has ever offered of the first appearance and origin of Iron Man. The issue has seen steady increases in value over the past few years thanks in part to the character’s adventures on the silver screen. From the Doug Schmell/PedigreeComics.com Collection. Realized: $262,900.
Fantastic Four #1 White Mountain pedigree (Marvel, 1961) CGC NM- 9.2: By far the best copy Heritage has ever offered of the first Silver Age Marvel comic book. When this copy was offered in the 1993 Sotheby’s auction it was proclaimed “the finest condition copy ever offered at auction.” The final auction price of $27,600 would have been a record at the time for a Silver Age book if not for the White Mountain Amazing Fantasy #15 in that same auction. From the Doug Schmell/PedigreeComics.com Collection. Realized: $203,150.
Todd McFarlane Amazing Spider-Man #317 Venom Cover Original Art (Marvel, 1989): “Has Venom become kinder and gentler? Read our lips, Spidey — no way.” This play on the now-famous phrase spoken by then-American presidential candidate George H. W. Bush at the 1988 Republican National Convention adds a touch of levity to this cover for “The Sand and the Fury.” Such primo McFarlane covers from his famed run on Amazing Spider-Man represent the absolute peak of late 1980s original art collecting, with those featuring the web-slinger’s great nemesis Venom at the top of that list. From The Shamus Modern Masterworks Collection. Realized: $143,400.
Captain America Comics #1 (Timely, 1941) CGC FN/VF 7.0: The first appearance of Captain America and Bucky, by Joe Simon and Jack Kirby. It’s also got the first appearance of the Red Skull and of course the famous cover co-starring the evil Hitler. Realized: $89,625.
X-Men #1 (Marvel, 1963) CGC NM 9.4: Beautiful copy, near the top of CGC’s list of finest examples for this important Marvel Age key, tied for 6th on Overstreet’s Top Silver Age Books list. From the Doug Schmell/PedigreeComics.com Collection. Realized: $89,625.
Journey Into Mystery #83 (Marvel, 1962) CGC NM- 9.2: The mighty Thor swings his hammer for the first time on this classic Jack Kirby cover, wiping out a horde of Stone Men from Saturn Journey into Mystery #83 has always been extremely popular among collectors, and remains one of the most valuable comics of the 1960s. From the Doug Schmell/PedigreeComics.com Collection. Realized: $83,650.
Heritage Auctions, headed by Steve Ivy, Jim Halperin and Greg Rohan, is the world’s third largest auction house, with annual sales more than $800 million, and 700,000+ online bidder members. For more information about Heritage Auctions, and to join and gain access to a complete record of prices realized, along with full-color, enlargeable photos of each lot, please visit HA.com.
[amazon_carousel widget_type=”SearchAndAdd” width=”550″ height=”200″ title=”More on The Amazing Spider-Man:” market_place=”US” shuffle_products=”False” show_border=”False” keywords=”The amazing Spider-man graphic novel” browse_node=”” search_index=”Books” /]