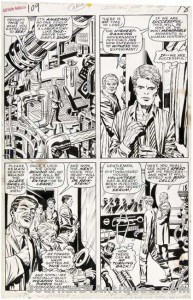 Illustrator Jack Kirby’s two-page re-telling of Captain America’s origin in Captain America #109 (cover dated Jan. 1969) sold for $43,320 at Auction #211 held March 20 by Hake’s Americana & Collectibles (www.hakes.com), based in York, Pa. Also, Kirby’s original art for page 8 from Fantastic Four #44, for The Gentleman’s Name is Gorgon!, which introduced Gorgon of The Inhumans, went for $12,851; and the art for George Herriman’s June 13, 1937 Krazy Kat Sunday page changed hands for $15,180. Prices include a 15 percent buyer’s premium.