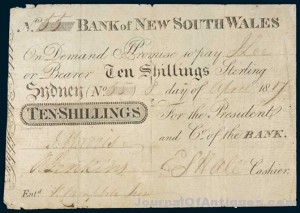 The only known example of Australia’s first official banknote – a 10 shilling note from 1817, one of 100 issued by the Bank of New South Wales (now known as Westpac) – sold for $310,000 at an auction held March 26 by Noble Numismatics, with offices in Sydney and Melbourne, Australia. It was a new world auction record for a colonial banknote. The note was discovered in a private collection in Scotland in 2005. The buyer was identified by Noble as “a high-up executive in a big organization.” The selling price includes Noble’s buyer’s premium.