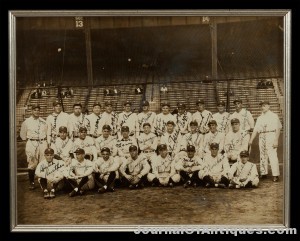 A 1927 World Champion New York Yankees team-signed photograph sold for $275,706 in an online auction that ended Apr. 18 by SCP Auctions, based in Laguna Niguel, Calif. Also, a Babe Ruth game-used bat was a hit for $171,190; what is generally believed to be the finest Wayne Gretzky game jersey in the hobby went for $110,293; Ray Nietzsche’s original 1967 Green Bay Packers Super Bowl II championship ring soared to $91,151; and Gus Williams’ 1979 Seattle Supersonics NBA Championship ring hit $91,000. Prices include a 20 percent buyer’s premium.