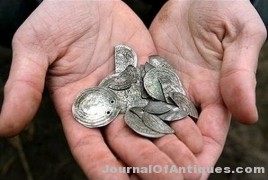 A 16-year-old Danish boy using a simple metal detector has unearthed the most important discovery of Viking-era coins since 1939. Stokbro Larsen was sweeping a field in northern Denmark when he came upon the trove of about 60 coins, each one bearing a cross that suggests they are from the time of Norse King Harald Bluetooth, who historians believe brought Christianity to Norway and Denmark. A subsequent dig in the area produced around 300 other Viking-era artifacts. Many are bound for museums.