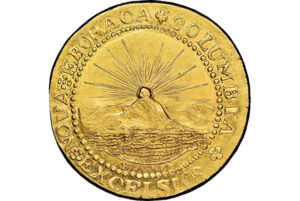 A 1787 gold doubloon coin, the finest example of just the seven known to exist, graded NGC MS65, sold for $9.36 million at an auction of important U.S. coins held January 21st by Heritage Auctions in Dallas, TX. It was the most ever paid at auction for a gold coin, eclipsing the previous record of $7.59 million for a 1933 $20 Double Eagle, sold in 2002. The doubloon, officially titled the 1787 New York-Style Brasher Doubloon, has been called “The World’s Most Famous Coin.”