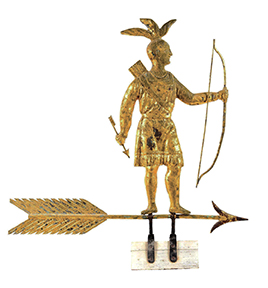 A late 19th century molded and gilded-copper weathervane depicting a full-bodied standing Massasoit Indian with bow and arrow atop directional arrow, made by Harris & Co. (Boston) sold for $258,300 at a Fine & Decorative Arts auction held June 8-9 by Morphy’s in Denver, PA. Also, a double-signed Keith Haring vase featuring some of the artist’s iconic motifs hammered for $84,000; and a scarce 1916 double-die obverse Buffalo nickel knocked down for $33,600.