When it comes to the world of Pop Culture collectibles, whether it be toys, video games, or trading cards, there is nothing more important than condition. You obviously have the rarity factor—the rarer the item the more desirable to a collector—but the condition is always key. Now an item’s condition is always up for interpretation, one person’s idea of good or excellent can be completely different than the next. However, the one thing that is not up for interpretation is if an item is factory sealed.

MISB (Mint in Sealed Box), MOSC (Mint on Sealed Card), NOS (New Old Stock), or MISP (Mint in Sealed Package) are all acronyms you will see in any collector or dealer’s headline of an item if it is factory sealed. For the true purist, the high-end collector, it does not get any better than factory sealed. Now, obviously, if you have a box that is sealed but infested with mold and looks like a truck drove over it, that is going to carry a much lower value than one that comes fresh out of a shipping case. That is an extreme scenario of course, but I still want to paint the picture that there are different degrees of condition within something being factory sealed.

The general point to remember right now is that when it comes to value, a factory-sealed item is going to yield you the highest return. To exemplify that, let us compare and contrast some fan favorites of each class of collectible.

Within the realm of Pop Culture, toys and video games are where you really see the biggest leaps in value when comparing an open product to a sealed one. To start, let us take a look at a 1979 Kenner Star Wars Boba Fett action figure. The fan-favorite bounty hunter first appeared on toy store shelves in 1979 on what we refer to as a “21 Back” card. The “21” simply means when looking at the back of the package it showed the 21 action figures currently available in the Star Wars toy line. The very first figures released in 1978 were 12 Back and it grew from there. The same Boba Fett action figure released in 1979 was continually rereleased through Empire Strikes Back (1980) and Return of The Jedi (1983). The front artwork would change to correlate with the respected movie and back number growing from 21 to 31, 41, 48, and then eventually 77 under Return of The Jedi (ROTJ).

After ROTJ, the final Boba Fett released in the U.S. was in 1985 on a Droids card back, which marks the end of the original Kenner Star Wars toy line. Droids was a children’s animated series focused on the adventures of R2-D2 and C-3PO that ran in tandem with Ewoks, a show focused on Wicket and friends.

So now you are probably wondering about Boba in MOSC condition? Well, that is still a loaded question. On the low end of the spectrum, if you have a ROTJ 65 Back Boba Fett with standard artwork, it is worth $1,000 to $1,500 if in average sealed condition with minimal wear. If you have an exceptional example with a perfect clear bubble, unpunched card, and you have it professionally graded and it comes back an 85, you would get $2,500 or more. But I am talking about the average figure you would say is a 7.5 out of 10 is in the $1,000 to $1,500 range. Now on the opposite end of the spectrum, if you have an original 1979 21 Back Boba Fett in the same condition it would easily be worth $7,000 to $10,000. Therefore your sealed Boba Fett that is not professionally graded could be worth anywhere from $1,000 to $10,000, depending on the card back.

That is a huge range of value, and it is all dependent on the packaging. Otherwise, you would just have another $50 loose Boba Fett that you cannot identify differently from the next.

Before I close on Mr. Fett, I would like to say this whole playout of values is exclusively for the U.S. action figure market. There is a whole range of Boba Fetts with variations based on the manufacturer with foreign releases or the factory’s country of origin whether it be China vs. Hong Kong vs. Taiwan vs. Macau and some that just do not have a mark! You could drive yourself crazy with variations within toy collecting. I just had to put that small stipulation before receiving angry collector Star Wars fanmail.

Boba Fett is just one example of thousands that could be made of how the packaging of a toy in most cases is more important than the toy itself. First, determine the condition of your toy and if it is factory sealed or not, then get to digging on the packaging. What can you find that makes an item special, the money is always in the nitty-gritty details, rarely does it smack you in the face.

You will find the same mentality across all fields of pop culture; you need to pay attention to the details. So, in that case, if you are a wiz with toys, you will be perfect at getting into video games.

When going about life I always try to look for the positive side of something. Even something as tragic as the COVID-19 pandemic – if there is one thing above all that COVID did to the collectible’s market is that it dumped a big ole bucket of Miracle Grow on it, and the shining star of it all has been video games.

The market for factory-sealed video games through 2020 has gone from 0 to 100 quicker than Drake in his 2015 hit O to 100/The Catch-Up. For this one we shall look at a 1999 Nintendo Pokémon: Yellow from Gameboy.

If you were a product of the 1990s, odds are you owned a Gameboy and played Pokémon. Back at the beginning of the pandemic, April 4th, 2020 at Bruneau & Co., we had a factory-sealed copy of Pokémon: Yellow up for auction estimated at $500 to $800 and it had sold for $750. That sounds all well and fine but fast forward to April 2021 and the same cartridge once worth $750 now commonly sells for $5,000 to $8,000 and sometimes more depending on graded condition. I do not know about you but a 10x growth in value is pretty substantial. I do not see many mahogany dressers or Roseville vases doing that.

But the main point here is the sealed condition because what kid would buy a video game and never open it! Just like a toy, video games were intended to be played with, not stored. I honestly feel it is harder to find sealed video games compared to toys. Toys could be left around sealed for a variety of reasons; toy collectors have also existed for decades. But video game collecting? That is a relatively new term. Most people who collect video games naturally do by always buying new games to play. I know for certain I had zero friends growing up who bought video games to look at them and never play; he would have been an odd duck.

This brings us to the pricing comparison, what is an open Pokemon: Yellow worth today? Well, if you were smart enough to keep the original box with insert, instructions, and paperwork you have a $300 to $500 game all day long. If you were like me and have just your cartridge housed in your zipper Gameboy carrying case, your game is worth about $40 to $60 depending on the condition of the sticker. No sticker on the cartridge you have a twenty-dollar bill. That is a long dive down in value from the $5,000 to $8,000 we were talking about on a sealed one.

I just cannot stress enough how important a toy or game can be when you find one in factory-sealed condition. It is the ultimate find for a collector in the wild, which brings us to our last stop with Pokémon cards and TCG as a whole.

TCG stands for “Trading Card Game,” the acronym used to describe a type of collectible card that is also used to play a strategy game. There is a variety of different TCG out there, but for collectors today the big three are Magic: The Gathering, Pokémon, and Yu-Gi-Oh!. The reason I saved TCG for the end is that although the sealed product is king, there are a variety of cards that individually sell for tens of thousands of dollars, and in some cases hundreds of thousands of dollars. 99.9% of the time most cards are not worth $1, but there are the rare, holographic, early print, 1st edition, etc. type variations that can make your Charizard in Pokémon, Blue-Eyes White Dragon in Yu-Gi-Oh!, or Black Lotus in Magic worth 5 or 6 figures instead of 2 or 3. But for this exercise, I want to focus on sealed packs for Pokémon.

When Pokémon was first released in 1999, packs would be purchased individually from a store or hobby shop after the dealer opens their booster box. A booster box is what a retailer would purchase containing 36 packs to then sell individually to the kids trying to catch them all. Today in 2021, a sealed booster box is really the cream of the crop for collectors of sealed cards. For example, last year at Bruneau & Co. Auctioneers we sold a 1999 Pokémon Base Set Shadowless booster box for $100,000. This is for a factory-sealed box within the original cellophane shrink wrap. Take those same 36 packs within that box, even in factory sealed condition individually outside of the booster box you would have $36,000 to $50,000 worth of cards. That is roughly $1,000 to $1,500 per sealed pack. The fact the sealed packs were still sealed within their original booster box insured the packs had never been tampered with or weighed by a collector to see if there was a heavier pack potentially containing a holographic card. A piece of plastic wrap similar to what you cover leftovers with was the difference of an additional $50,000. I would say you could not ask for a better example of how important original packaging can be.

In closing, the reason why collectors spend the most money on sealed merchandise is because it is the closest thing to recreating that feeling you had as a kid. Whether you opened your Boba Fett on Christmas morning in 1978 or remember getting a Gameboy for your birthday there is nothing more exciting than that initial feeling before you open it. Having a sealed item brings you back to the day you got it, and to have that feeling again can be priceless to some people. I know it is for me. 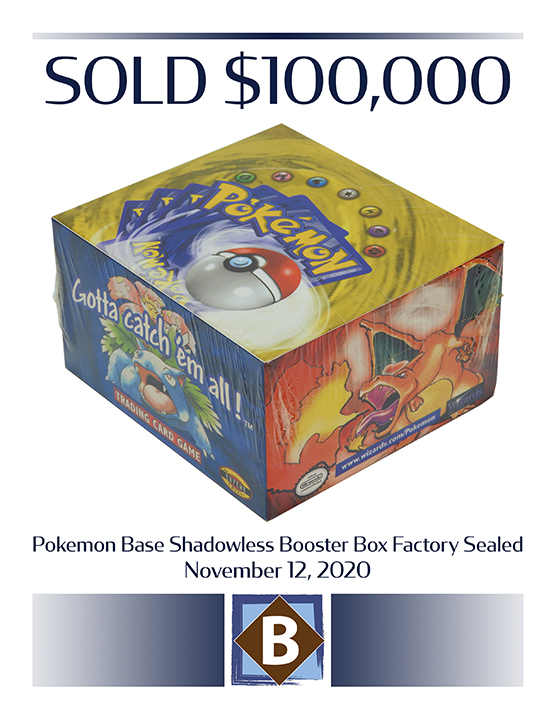 Travis Landry is the Director of Pop Culture, antique specialist, and auctioneer for Bruneau & Co. Auctioneers. Travis oversees the procurement of merchandise and organization for toy, comic, and collectible auctions. Travis’ daily responsibilities include overseeing the intake, research, and cataloging of merchandise for all online catalogued sales specializing in 19th and 20th century decorative and fine arts. Travis is a frequent panelist and guest at comic conventions across the country having been a recurring cast member on Travel Channel’s Toy Hunter. Travis holds a bachelor’s degree in art history from Framingham State University and can currently be seen as an appraiser in collectibles and toys and games on PBS’ Antiques Roadshow.