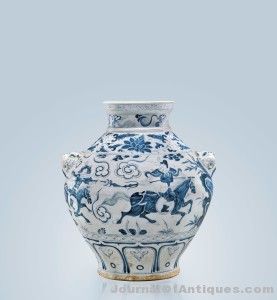 A magnificent 14th century Yuan Dynasty blue and white ovoid porcelain jar, with narrative scene from the Yuan zaju drama The Savior Yuchi Gong, sold for $1.324 million at an Asia Week Sale held Mar. 17 by I. M. Chait in Beverly Hills, Calif. Also, an early 15th century Ming Dynasty gilt bronze bodhisattva of Manjushri, with six-character Yongle mark under the base, made $274,500; and a large spinach jade brushpot with a continuous landscape scene of sages in a courtyard, 7 ¾ inches tall, hit $122,000. Prices include a 22 percent buyer’s premium.