News & Views From the World of Antiques & Collectibles
By Ken Hall
An oil on oak portrait of an aging Queen Elizabeth I that hung in a modest garden gift shop on the Outer Banks of North Carolina has been dated to 1592 (when the Queen would have been about 60 years old) by an East Carolina University conservator. Now that it has officially been authenticated, the work has been whisked to Washington, D.C., to be part of an exhibit at the Folger Shakespeare Library called Nobility and Newcomers in Renaissance Ireland. Queen Elizabeth I ruled over Ireland as part of the United Kingdom. 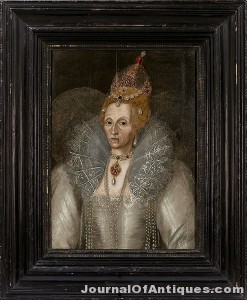 For years a debate raged over how old the painting is, who painted it and how much it is worth. The question of age has been answered and most art experts agree the painting can be attributed to the school of Marcus Gheeraerts the Younger, an artist of the Tudor court. As to its value, that will be discussed on an episode of CNBC’s Treasure Detectives, which will feature it in a segment. The painting was donated to the Elizabeth Gardens in North Carolina in 1950 after a collector bought it from an art gallery in New York City.