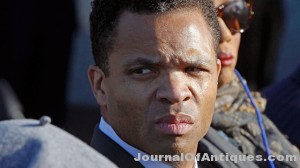 A planned auction of assets forfeited by disgraced Congressman Jesse Jackson, Jr., was canceled by the U.S. Marshals Service over concerns that one of the items in the sale – a guitar supposedly autographed by Michael Jackson and Eddie Van Halen – might have fake signatures. The guitar would have had a starting bid of $525. Other items up for bid were to include pictures and posters signed by Michael Jackson and Kung Fu legend Bruce Lee, as well as two fur capes, a pair of fur coats and other clothes and memorabilia.
Jackson, the son of civil rights leader the Rev. Jesse Jackson, Sr., was sentenced to 2 _ years in prison for misuse of campaign funds. Money raised by the auction was to go toward paying down a $750,000 settlement. Jackson had used the money for personal purchases such as kitchen appliances, clothing, collectibles, food, travel and health club dues. His wife, Sandi, a former Chicago City Council member, was sentenced to a year in prison for filing false joint income tax returns. The auction will be re-scheduled.