The city of Hamburg is famous for many things. There’s the port, Germany’s largest, the Fish Market, where deep-voice fishmongers hawk seafood, St. Michael’s Church, an exquisite, Baroque structure.
And then there’s the Reeperbahn.
Located just a few blocks from the port, the Reeperbahn is a one-mile strip that consists of bars, nightclubs, and an eccentric mix of shops.
Basically, you go to the Reeperbahn if you’re looking for some sin.
Though I had been to the Reeperbahn several times – mostly to go to bars – I decided to visit it again, this time to see what antiques and collectibles I could find and to try to get a sense of what the items revealed about the area.
But I quickly ran into a problem once I arrived. I had thought that on the main drag there would be some shops suited to my purpose. But all I kept passing were the shops, bars and nightclubs.
In the 17th and 18th centuries the Reeperbahn was used by rope makers working for the ship industry. The rope makers were attracted to the area by the availability of open ground on which to twist ropes. In fact, “Reep” is an old German word for “rope,” and “Bahn”means “lane.”
Eventually, the rope makers left the area, and the bars, nightclubs and shops took over. 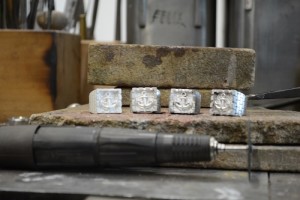 But I had never realized to just what extent. After walking for a while and finding no antique stores or anything of the like, I decided to walk off the main drag and onto the quiet, cobblestone side streets. There I had luck.
The first store I noticed, S.P.O.C. Fashion, mostly sold 1950s inspired dresses. It also sold other vintage-like items, like letterman jackets.
When I asked the saleswoman if she could describe the store *and* the Reeperbahn in one adjective, she said, “rock ‘n’ roll.”
I thought the description was accurate. The rules really don’t often apply on the Reeperbahn. In fact, as I continued to walk the side streets looking for stores, I heard music and singing coming from inside several bars. And it was noon!
The next shop I chose to visit was CustomRingz. The rhinestone skull rings in the store’s window had intrigued me. Inside, I asked the owner which items were the most popular. Easy, he said. The chunky silver rings that bear the unofficial symbol of Hamburg: the anchor.
I thought that made sense. The people of Hamburg love their port. Some people can sit for hours and just look out at it the same way other people can just sit and watch a sunset.
After I left CustomRingz, I wasn’t sure where to go next. So I tried a street I knew and have always liked: Grosse Freiheit. I like Grosse Freiheit, which means “great freedom,” because I’m a Beatles fan and The Beatles got their start in the clubs along this street.
Though clubs line most of Grosse Freiheit, all the action peters out at the northern end of the street, and Grosse Freiheit turns into a quiet, almost desolate cobblestone road flanked by small brick buildings.
It was here, at the end of Grosse Freiheit, that I found my third shop: Hip Cats, which sells vintage clothing.
The shop’s owner, Romana Burgemeister, quickly led me to the shop’s small men’s section. Along the way, I saw colorful coats, a pillbox hat and winged framed glasses.
I appreciated her help, but I was more interested in knowing why she found vintage clothes attractive. “It’s about authenticity,” she said. “There is something authentic about these clothes. It’s in the material, the cut – everything. It’s something that’s hard to find these days.”
Chad Smith is a freelance journalist originally from Queens, New York, now living in Hamburg, Germany. He has worked as a general-assignment and beat reporter and has been published in the New York Times and the New York Daily News among other publications. Chad has a master’s degree in journalism from New York University.

On the Road to… Massachusetts

On the Road to… Illinois