The Exposition Internationale des Arts Décoratifs et Industriels Modernes (International Exhibition of Modern Decorative and Industrial Arts)—the Paris Exposition of 1925—opened its doors to the world on April 28th, creating massive interest in the fair’s Style Moderne theme as presented in the architecture of the fair’s pavilions, and the more modern design interpretations they displayed and promoted for everything from fashion to jewelry and home goods.

The fair, a celebration of modernism, was staged with the intent of re-establishing France as the arbiter of taste and fashion in the post-war era. It looked to fuse the French Art Deco aesthetic, already popular in France by 1925, with the international avant-garde movement in architectural design and the decorative arts sweeping through Europe, to present a unified European vision of the future to an international audience. Its message: traditional form and design were the past; modernism, in all its forms, was the future.

Fifteen-thousand exhibitors from twenty different countries participated in this post-war event; however, the fair was dominated by French companies and artisans, and other mostly European participating countries.

The United States was notably absent from the fair supposedly due to the fact that she lacked designers whose work met the requirements laid out for display submissions. The stipulation that ultimately disqualified American participation was that no design could be based on historical styles – everything was required to be exclusively modern. It is said that the U.S. Secretary of Commerce at the time, Herbert Hoover, explained that there was no modern art in the United States.

Regardless, hundreds of American designers, artists, journalists, and department store buyers came to Paris to see the Exposition. These visitors were inspired by what they saw and propelled an Art Deco awakening in American architecture, fashion, and design in the coming years. This movement launched new companies, influenced an era of newly envisioned, modern-looking consumer goods, and saw the building of skyscrapers that forever changed city skylines. In hindsight, it was acknowledged that the exclusion had more to do with a misunderstanding of the fair’s guidelines than a lack of a Moderne, American artistic vision.

The global influence of the fair on design and craftsmanship was unmistakable; however, it wasn’t until the late 1960s that the term “Art Deco” was coined and retroactively applied to the Modernism movement taking place around the 1925 Exhibition. Today, the term is used to refer to an aesthetic and period of art between 1909 and 1939 defined by the use of sleek geometric or stylized forms, heavy use of color, surface embellishment, and the use of man-made materials.

Welcome to the Fair

Unlike other Fairs that were built on undeveloped fairgrounds with many of the buildings becoming permanent fixtures, the 1925 Exposition occupied 57 acres in central Paris, stretching from the Esplanade des Invalides across the Pont Alexandre III to the entrances of the Grand Palais and the Petit Palais, both built for the 1900 Exposition.

Given the location of the fairgrounds, the structures and pavilions built for the Exposition were only ever intended to be temporary. Charles Plumet, the chief architect for the exposition, was charged with conjuring up a splendid but temporary fairyland that would last for six months. Knowing that their creations would vanish after the fair, architects were given free rein to design pavilions in their own interpretations of French art moderne. The result was architecture the likes of which the world had not yet seen.

In an exposition whose stated theme is the decorative arts, first impressions are important. The Port d’Orsay entranceway, one of 12 entrances into the fairgrounds welcoming the Fair’s over 15 million visitors, featured a monumental Art Deco steel structure frame, designed by Louis-Hippolyte Boileau, to hold a semi-abstract mural. Figures and structures labeled Sculpture, Ceramics, The Book, Architecture, Wrought Iron, Furniture, and, highest-placed of all, Fashion. The ensemble was meant to clearly articulate the unity of the fine arts with the applied arts at the exposition. 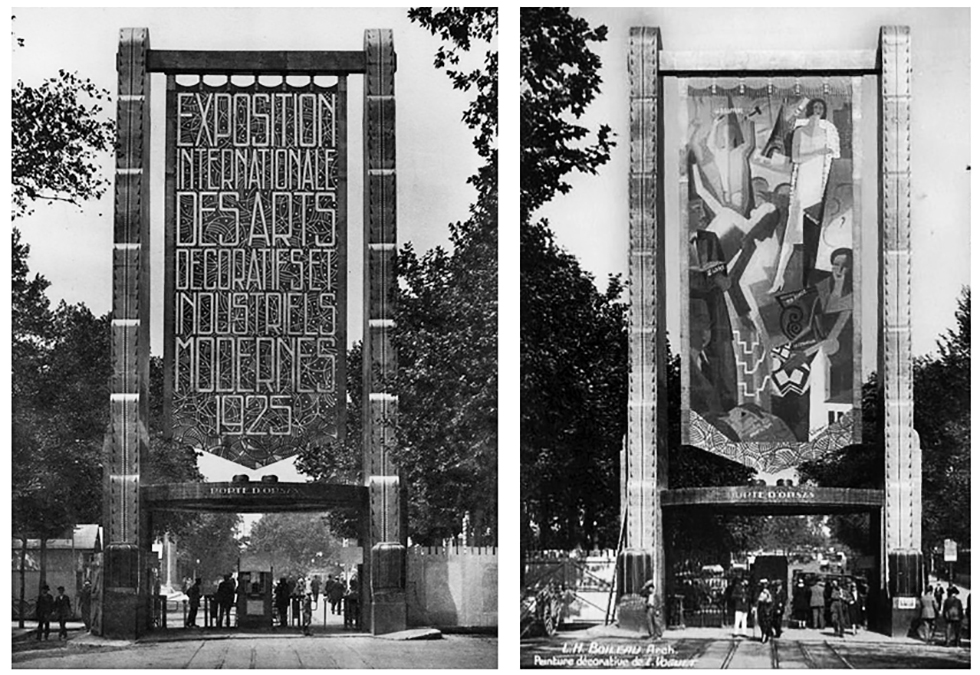 The Porte d’Honneur was only one of twelve monumental entranceways to the exposition. For some visitors, the most striking was the Porte d’Orsay, designed by Louis-Hippolyte Boileau. The Art Deco steel structure served as a monumental frame for a semi-abstract mural. Figures and structures labeled Sculpture, Ceramics, The Book, Architecture, Wrought Iron, Furniture, and, highest-placed of all, Fashion. photo: arthurchandler.com

Another iconic Art Deco entranceway was the main gate, La Porte d’Honneur, designed by the firm of Favier and Ventre. Simulated stone combined with bronze and wrought iron, illuminated by indirect neon light, provided visitors with a stunningly framed view of the Grand Palais and gave the entranceway a sense of majesty by day, mystery by night. Cast-iron reliefs over the gateways celebrated the dignity of labor. A monumental statue by Antoine Bourdelle, celebrating the arrival of American fighting forces in France in 1917, further defined the entrance location, much to the delight of American visitors to the fair.

Once inside the gates, the visitor could sample the delights of Art Deco in the many structures and pavilions that populated the fairgrounds. Those visitors who entered through the La Porte d’Honneur gate were met by an extraordinary fifty-foot fountain of illuminated glass designed by the famed glassmaker, René Lalique. This art deco crystal fountain, Les sources de France, illuminated from within, was an amazing feat of engineering and became one of the landmarks of the Exposition. The Fair also helped introduce Lalique to the U.S. market. American tourists enamored with the refinement and craftsmanship of Lalique’s decorative objects bought up Lalique glasses and decanters, ashtrays, smoking accessories, vases, perfume bottles, and vanity table accessories to send back home and to give as gifts, creating a consumer market for his brand in the U.S. that reached its peak at the start of the second world war.

Just inside the main entrance on the Place de la Concorde was the main promenade of the Exposition, which housed the pavilions of the major French department stores and manufacturers of luxury furniture, porcelain, glassware, and textiles. Each pavilion was designed by a different architect and they tried to outdo each other with colorful entrances, sculptural friezes, and murals of ceramics and metal.

Some of the most notable of these pavilions were designed for the Parisian department stores, notably Galeries Lafayette, Le Bon Marché, Au Louvre, and Le Printemps. To promote a consumer market for this new Moderne aesthetic, these upscale department stores created furnished and elaborately decorated showrooms intended to showcase what we know today as Art Deco-inspired goods: furniture, decorative objects, jewelry, home goods, art, fashion, and home decor.

Given its ornamental nature, it is perhaps unsurprising that the most prominent Art Deco structures at the Exposition were not necessarily from countries and architects but those that featured French businesses and decorative artists. These pavilions provided wide, personal interpretations of the aesthetic applied to a range of consumer goods and decorative objects. 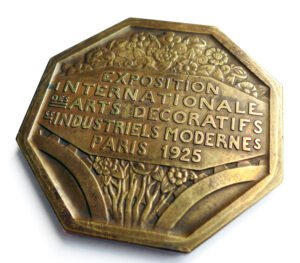 The Art Deco aesthetic was also represented in the many French architects engaged in the design, building, and decorating of France’s many business pavilions at the fair. The Collector’s pavilion, designed by architect Pierre Patout and decorated by Jacques-Emile Ruhlmann, as well as the bell-shaped Tourist pavilion, designed by Robert Mallet-Stevens, are now considered iconic representations of Deco style.

Several foreign pavilions built for the 1925 Paris Exposition incorporated their country’s own interpretation of modern architecture and design. Even the Soviet Union showed up with a pavilion designed by Dom Mel’nikova, in what today is considered Soviet avant-garde architecture. The pavilion’s open staircase was unprecedented. The glasswork, laid out in flat sheets, stood vertically adjacent to the stairs, allowing visitors to view the entire contents of the building’s interior (its stands, internal layout, and displays) from its steps.

Art Deco fell out of fashion with WWII, often bookmarking the design movement between the two world wars and the Great Depression. Art Deco saw a resurgence in the 1960s, and today enjoys a strong collectors market across such fields as poster art, ephemera, jewelry, desk and vanity table accessories, fashion, furniture, appliances, and more.

Ephemera—from poster art to catalogs, illustrations, and postcards—lead in market popularity. They idealize the essence of the movement in the images and stylized look that define the era and the Paris Exposition of 1925 and can be found for varying price points.

An important collection of graphics created as promotional material for the exhibition, comprised of one of each of the four posters commissioned for the exhibition, one commemorative certificate given to exhibitors and judges, a poster advertising the sale of bonds for the exhibition, and an actual bond, sold at a Rago Early 20th Century Design auction in January 2021 for $6,250. A collection of 11 various graphics catalogs from the fair is now selling on 1stDibs for $2,500. On the more affordable level, a rare 27” x 21” bronze award certificate to a Czechoslovakian Artisan for his sculpture in the Czechoslovakian Pavilion, sold for $225 in November 2020 through Invaluable.com. On eBay, a variety of 1925 ephemera—everything from promotional poster stamps, photographs from the fair, and pavilion postcards—can generally be found for less than $25. eBay is also a good resource to search for other affordable fair souvenirs such as medals, photo albums, and plaques.

The greatest takeaway, however, is more permanent than the souvenirs and images that defined and promoted the 1925 Paris Expo, especially in America.

The Art Deco Legacy in America

Despite coming late to the party in their embrace of Modernism, American designers, artists, and architects took the precepts of modern thought, respect for craftsmanship, and the use of non-traditional materials infused with a uniquely American point-of-view. Coined Streamline Moderne, this aesthetic dominated architecture in the years following the fair and into the Depression.

Such iconic skyscrapers as the Chrysler building, the Empire State Building, and the Eldorado Towers in NYC; the Chicago Board of Trade building and the Old Post Office; and the Eastern Columbia and Hollywood Bowl structures in downtown Los Angeles are a permanent homage to an iconic symbol of the American Art Deco movement and Modern America.

Ocean liners and movie theatres also emerged during this period as monuments to the design aesthetic, which was carried into the interior of these Art Deco buildings, structures, and planned communities. The look was applied to everything from the interior design of a single room to the design of household appliances, furniture, decorative objects, and lighting. It was a look that required more than one piece to pull it off.

On a more personal level, Art Deco was also the fashion of the day, defining design trends in clothing and jewelry. Nineteen-thirties fashion was heavily influenced by the Art Deco aesthetic. It was always classy and integrated fine materials and craftsmanship into its design. It relied heavily on beautifully textured richly dyed fabrics that lent depth to the simple angular lines of the dresses. These dresses relied on simple shapes (think “flapper” dresses) combined with draping and bold colors and textured textiles to create an overall effect which today is easily identifiable as “of the era.”

Although only a moment in design time, the Art Deco aesthetic expressed a modern world view in a post-war era that even today resonates with consumers, collectors, and historians. While the concept of Modernism continues to evolve and be reinterpreted by designers and admirers, the school of thought that inspired the iconic designs of the Art Deco era is forever anchored to this period of time and its international debut at the 1925 Paris Exposition.