Tools and American Life in the Pilgrim Era
By Erica Lome
Almost four hundred years ago, Pilgrims landed on Plymouth Rock. This story is often told in classrooms, museums, and tours — and for good reason. Much of the American narrative is founded on the activities and actions of this rag-tag group of settlers who fled persecution and crossed the Atlantic in search of religious freedom; but with this “New” England came new environments with new challenges for these newcomers.
The adaptation and design of tools from this era illustrate encounters, collaboration, and resistance between native and non-native populations. Additionally, seemingly ordinary artifacts from Plymouth took on new aesthetic, functional, and cultural roles within indigenous communities through trade. The work of forging and maintaining tools for everyday life also demonstrates how the expectations Pilgrims had of the New World frequently clashed with reality. As we approach the 400th anniversary of the Mayflower, a reconsideration of early tools may clarify and benefit our own understanding of America’s founding story.
When the Pilgrims left Europe, they left behind a deforested landscape completely cultivated for agriculture. In America, they encountered differences in climate, environment, and vegetation. The abundance of wood in Southeastern Massachusetts made it easy to immediately begin construction on houses and fortification for settlements. Two-man pit saws (also known as whipsaws) aided this process for the first few decades, and colonists quickly established sawmills to process and export clapboards made from Eastern White Pine, Oak, and Cedar trees.
Crucial to the development of Plymouth Colony were axes. The 17th-century axe used by the English consisted of two pieces of iron hammered and welded down the center of a poll. As the colonists built their homes out of the timber native to the region, they found their traditional tools insufficient for the task of felling trees. During the process of repair work, blacksmiths up and down the coast began experimenting with lengthening the side of the axe that wrapped around the poll, creating more room for the welding surface. This resulted in a tool with more weight and better balance, and modern axes descend from this model. Generally, however, the tools produced by Plymouth blacksmiths were rough and unrefined copies of the superior English implements originally brought over. Improvements or changes in style were rare.
A typical provision list for the Pilgrims might have resembled the one created by John Smith after returning to England from the Jamestown settlement. His list of tools included broad and narrow hoes; broad axes, pickaxes and felling axes; handsaws and whipsaws; hammers, shovels, and spades; tools for boring, drilling, and chiseling wood; hatchets and grindstones; and of course, every type of nail imaginable. Additionally, iron implements for cooking and homemaking were important additions to these lists. Women were as much involved in the survival of the settlements as men, tasked with handling unfamiliar ingredients and meager resources. 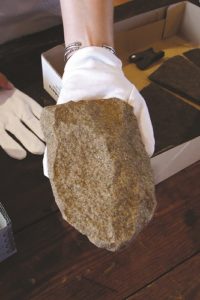 Back in England, local blacksmiths operated out of a complex and organized guild system. Master blacksmiths regularly took on apprentices for up to a decade of tutelage. Along the way, apprentices become journeymen — contract workers on a daily rate — until they could succeed and take on the mantle of master. In Plymouth Colony, and throughout the rest of the English settlements, there was no such guild system. While men (and some women) took up blacksmithing later in the 17th and 18th centuries, early Americans did not produce their own tools. Rather, the task of American forges and the men who ran them — often while working other jobs — was mainly repair work. A 1639 “Provision Suggestion” used by colonists noted, “Though all these be made in the country (there being diverse blacksmiths) yet being a heavy commodity, and taking but a little storage, it is cheaper to carry such commodities out of England.” As this list suggests, importing tools from England was the best and cheapest method.
Tools often found on provision lists were locks and keys. The Pilgrims, bound together as a community and dependent on each other for survival, still valued privacy and social boundaries. Locks also imply protection, for even their few valuable items might be subject to theft or opportunity – particularly as their colony became increasingly vulnerable to the presence of external forces.
The colonists at Plymouth resided alongside the Wampanoag people of Southeastern Massachusetts. For thousands of years, the Wampanoag developed their own system of hunting and gathering using tools adapted from nature, including bone, stone, wood and shell. The Pilgrims were not the first Europeans the Wampanoag had encountered, but their community presented opportunities for both economic and cultural trade.
While the Pilgrims frequently acted suspicious and hostile towards their native neighbors, the Wampanoag took advantage of English materials to improve their own tools. Cast-off nails replaced bone as drills in pre-modern mechanisms; English pots acquired through trade were hammered and rounded over stones to create eating utensils; and iron fishing hooks quickly took the place of bone hooks. Beads, buttons, and other decorative accessories appealed to the Wampanoag as a means of currency, and might have been adapted into ornamental pieces for spiritual or ritual use. For example, copper scraps were turned into pendants and often were buried with esteemed members of the tribe.
Western tools certainly proved useful to the Wampanoag people, and they returned the favor by teaching the Pilgrims the fundamentals of survival in their new home, such as growing Indian corn and hunting animals. Firearms such as fowlers aided in this process. Bullet molds and “fun worms” to clean out the barrel of guns are among the commonly found remnants at archaeological sites. Lead bullets were used to fowl birds, and at least in the early days of Plymouth Colony firearms were viewed more as a means for securing food than weaponry.
Plymouth Colony, aside from being a religious mission, was also a financial venture. Investors in Europe needed the settlement to survive as much as the Pilgrims did, so trade with the Natives fast became a priority.
Some of the most important tools in the colony were those for agriculture. Foodstuffs were sold in exchange for raw materials such as furs, which the colonists shipped to England to make hats or coats. Eventually, many of those life-saving accoutrements were shipped back to America, spread among the Pilgrims, and traded back to the Native Americans.  Plymouth Colony did not yet have the means to produce its own objects, and were thus at the mercy of their Native American trading partners for maintaining their livelihood. This cycle of labor, trade, and production summarized the work of the colonists, although the settlement never achieved success among investors.
Many of the tools explored in this article are easily identifiable; however, what about the pieces that resist categorization? A curious item resides among the archaeological scraps collected and inventoried by Plimoth Plantation. A hollow tube, roughly the side of one’s palm, with a circular opening on one end resists easy identification. Not a tool to aid in farming, building, or cooking, this strange implement is in fact called a Goffering Iron, used to iron ruffles in the large white collars worn by the more elite members of the colony. 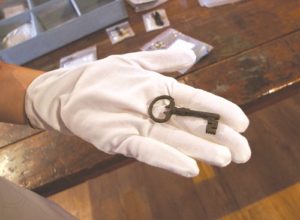 Traditionally, goffering irons were set horizontally and attached to a thin iron stem leading to a square base. Sticking a hot poker or rod into the opening heated the tube and the collars could then be wrapped around the cylindrical surface to create the ruffles ubiquitous in portraiture of the era. The implications of this object found near Plymouth Colony are multifold — why bring a tool for maintaining fashion to a remote and unknown landscape? Why the need for vanity and a perfectly ironed collar while a community struggles to survive? Of course, while the Pilgrims fled their homeland to start a new life with religious freedom, they did not once consider abandoning the very thing that made them English. One assumes that they feared the influence of the native populations, whom they called “savage,” and clung desperately to their ideals of civilization and superiority. Objects like the Goffering Iron indicate that physical and cultural survival concerned the settlers in nearly equal measure.
There is surprisingly little scholarship on early American tools, although archeological findings provide comparative and instructive examples for both the historian of Colonial America and the enthusiast of early tools and tool making. Currently, the Plimoth Plantation archeological collection contains over 50,000 fragments and 3,500 original objects, both from which over 6,000 reproduction pieces have been forged for the benefit of education and living history. Blacksmiths operating in trade shops base their workmanship on what the Pilgrims and other colonists left behind. The objects we find from early America tell a story of perseverance and hope. America was forged, one tool at a time.
The Journal of Antiques and Collectibles thanks Plimoth Plantation for their assistance, including Manager of Media Relations Kate Sheehan, Curator of Collections Kate Ness, Guest Experience Manager of the Wampanoag Indigenous Program Tim Turner, and Master Blacksmith Mark Atchson. Plimoth Plantation provides an engaging and experiential outdoor and indoor learning environment which tells the complex and interwoven stories of two distinct cultures — English and Native. The main exhibits are enhanced with an exciting menu of special events, public programs, and workshops that offer a rich and diverse exploration of the 17th century. Plimoth Plantation is open 7 days a week from 9 a.m. to 5 p.m. Please visit the website plimoth.org for more details.

The Collectability and Usability of Antique Tools

Hearth to Hearth: The American Turkey and Thanksgiving