The Journal of Antiques and Collectibles – August 2006 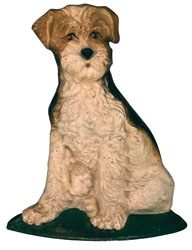 Those lovely, colorful doorstops that have been bringing record setting prices in recent auctions have drawn the attention of folk art collectors, as well as decorators, and of course, doorstop collector enthusiasts. Generally cast in iron, they are avidly sought after by today’s collectors. Though mass produced, they were usually painted by hand, so each has become a unique treasure, appreciated both for its subject matter and the “folk art” quality of its paint, form and design.

Doorstops were produced in Europe as early as the late 1700s, but became more widely manufactured beginning in the early nineteenth century in Europe, particularly in Victorian England and France. Doorstops were needed to keep doors open to insure the circulation of air, and to guard against the door being blown shut. At first, doorstops were improvised….a stone from a garden, a wedge of wood, a piece of furniture. By the mid-1800’s, doorstops had become fashionable decorative items. They served a practical and utilitarian purpose; plus added charm, color, and decorative appeal to the home.

Doorstops proved to be both profitable and popular, and by the last half of the nineteenth century, English foundries were producing them in the shapes of animals, flowers and figures. Soon after the Civil War their popularity and manufacture migrated to the United States Foundries, where the frugal Yankees downsized them in size and weight. The height of doorstop popularity in the United States was the 1920s and early 1930s. Doorstops were carried in many gift shops, and even the Sears Roebuck Catalogue offered a few, including a Boston Terrier, French Bulldog and German Shepherd.

Being relatively inexpensive, doorstops brought many decorating opportunities to the housewife of the 20s and 30s. She could purchase coordinated sets of cast iron accessories that would include doorstops as well as bookends, doorknockers, shade pulls, etc. Doorstops were functional and decorative at the same time, providing color and flair to the household. The themes reflected the times – Art Deco, animals, circus figures, golf, nursery rhymes, wildlife and even Teddy Roosevelt. Of course, when spring arrived and doors were opened, the flower doorstops were quite popular and some designs were widely produced. As time progressed, costs increased and manufacturing decreased. The demand for raw materials brought by World War II meant that production of doorstops virtually ceased. More than that, it is not hard to imagine that many doorstops were sacrificed to the cause. During the war, there were countless neighborhood drives to gather iron and other materials to be melted down and remolded for military purposes. Despite a few signs of life, most of the foundries closed their doors in the late 1940s and early 1950s. The end of the doorstop as a functional piece coincided with the spread of air conditioning in the 1950s and later. Doorstops simply became obsolete and passé.

There are as many reasons for collecting doorstops as there are collectors. Doorstops appeal to an individual’s sense of beauty. Some people are motivated by nostalgia. They remember the doorstop at grandma’s house, and associate doorstops with the good old days, when life was simpler and less stressful. Some people have an aesthetic appreciation for them; doorstops are an art form – cast iron sculptures in miniature – expressing someone’s creative vision and execution. Others collect by theme such as cats, dogs, birds, flowers, wildlife, black memorabilia, sports, comic images and nautical. Some collectors collect only pieces made by a particular foundry, and still others collect from a combination of all of these motivations and more.

There are, in fact, some collectors who use doorstops as they were originally intended – to hold open doors. Doorstops add an interesting detail to any home, and are sure to invite comment and compliments. But for the most serious collectors, there are simply not enough doors to accommodate their collection. So they have given their doorstops other places of honor in their homes.

Cupboards are great for display, and antique cupboards look especially inviting when their shelves are graced with a doorstop collection. In a similar way, many collectors have custom-built shelves installed that are sturdy enough to hold their collection. Those with book shelves or libraries often make double use of the doorstops as both objects of beauty and functional bookends. Doorstops look wonderful sitting along stairways, displayed on fireplace mantels, window sills, or kitchen counters and cabinet tops. Use your imagination and decorating skills!

Because they are cast objects, doorstops lend themselves to reproduction. It is important that collectors educate themselves and seek out experienced collectors and dealers. Older doorstops usually have a smoother, more refined casting, while reproductions are rougher or pebbly. Seams, if any, are usually tighter on the original doorstops. Reproduction doorstops cast in two or more pieces are usually assembled with Phillips-head screws, while the originals used slotted screws. The mold marks in old casting were generally ground off by hand using a file. Reproductions are cleaned up using power tools and tumblers, leaving coarser grinding marks.

Collectors should look carefully at the wear patterns on the doorstop. Remember most old doorstops were used for their original purpose – holding doors open. They were dragged along floors, and brushed by brooms, and washed over by careless mops. Look for wear in the logical places – at the top where it was handled and around the base. Reproducers of doorstops sometimes “age” them, hoping to give them an authentic look. However, the “invented” wear rarely has the look of the real thing. Most importantly, beginning collectors should visit as many collections as possible and handle as much cast iron as possible. As you become more familiar with early doorstops, most reproductions should become easier to identify. To avoid buying reproductions, purchase from reputable and knowledgeable dealers. Read published material on doorstops. The recently published book The Doorstop Book, An Encyclopedia of Doorstop Collecting, features over 1000 doorstops in full color, plus the history of doorstops, information and marks of the foundries, original catalog pages and much more valuable information for collectors.

There are three major factors that go into evaluating a doorstop. Of these, the most important factor is condition. The better the condition, the higher the likelihood that the doorstop will retain and increase in value over time. Always buy the best you can afford and upgrade when possible. The second factor is desirability. Certain doorstops with outstanding form, character, sculptural quality and folk art appeal are in demand among collectors, all of which cause the price to go up. The third factor in evaluating a doorstop is rarity. Several factors can contribute to the rarity of an item. In some cases the original production run was low because the designs failed to find a market, because they were too costly to produce, or perhaps because the foundry was in business for a relatively short time. In other cases, rarity is caused by bad design. Designs with thin castings broke at the stress points, and designs that were ill-balanced broke after repeatedly falling over. When a piece has all three of these factors, condition, desirability and rarity, it brings the highest price in the marketplace. An additional contributing factor in value is the manufacturer. Many collectors favor certain companies such as Hubley, Bradley and Hubbard, Spencer and cjo (Judd Co.).

Finally, themes must be factored into the value. Some collectors that specialize in a subject matter are willing to pay a premium for a doorstop that fits into their niche. Other doorstops, like black memorabilia, nursery rhymes and nautical themes, find a cross-over market, appealing to collectors who are seeking certain themes in any form. This kind of demand will naturally have an effect on the price of the piece. We are experiencing just such an effect now, as folk art enthusiasts are discovering doorstops and adding them to their collections. But don’t let those record breaking prices discourage you; doorstops are still plentiful and many are available in the $100-$300 range.

The recently formed Figural Cast Iron Club (www.figuralcastiron.org), is an excellent resource for those devoted to the art of collecting doorstops. This newly formed club already boasts more than 200 members and had its inaugural meet and greet in Denver, Pennsylvania in April 2006. This organization provides an outstanding venue for sharing knowledge among those who appreciate figural cast iron items, including doorstops, doorknockers, bookends, etc. The club publishes two informative newsletters a year, plus has an annual spring convention. A visit to the club’s website is well worth the time.

Also, be sure to visit our website, www.castirononline.com, to purchase an autographed copy of the book The Doorstop Book, An Encyclopedia of Doorstop Collecting and also to view doorstops and other cast iron for sale. Hopefully, the pleasure of doorstop collecting will “open” many doors for you!

The authors, John and Nancy Smith, are widely recognized authorities on doorstops and have been avid collectors for over thirty-five years. As dealers, using the name “American Sampler,” they have appeared at major antique shows since 1971. This wonderful new book brings together over 1,000 doorstops photographed in full color and organized by categories: flowers and fruit, birds, animals, covered wagons and coaches, Native Americans, people, houses and windmills, and nautical. It contains valuable information for collectors, including an informative history of doorstops, histories and marks of the foundries, original catalog pages, and much more. Gathered from various wonderful collections, this book represents some of the finest doorstops ever produced and gives the reader a broad, encyclopedic view of the hobby. Values are included.

For further information on doorstops, and to order copies of [amazon_link id=”0764323938″ target=”_blank” container=”” container_class=”” ]The Doorstop Book, An Encyclopedia of Doorstop Collecting[/amazon_link] by John C. and Nancy M. Smith, please refer to the website www.castirononline.com.

Do you collect doorstops?