A Working Vacation – Business of Doing Business – The Journal of Antiques and Collectibles – September 2006
By Ed Welch
I do not think it is possible for an antiques dealer to take a real vacation. My wife and I quit trying to do so after our youngest child went off to college. My wife, Marilyn, and I spend two weeks to a month in Europe every year buying antiques. We usually visit Europe in February, which is the slow season. Air fairs are low, prices in hotels and restaurants are low. Expenses in Europe at this time of the year are actually cheap.
On July 2, Marilyn and I celebrated our 40th wedding anniversary. We moved our buying trip from February to the last week of June and the first week of July. We wanted to celebrate our 40th anniversary doing something different.
I wanted to spend our anniversary in Florence, Italy. My wife wanted to visit Scotland. I tried for several weeks to convince her that Florence would be a much better choice. I pointed out the Cathedral in Florence, the Medici family museum, and the chance to see artwork by Michelangelo, Leonardo da Vinci, and Raphael. She would have none of it. We started planning our visit to Scotland.
If Marilyn wanted Scotland, then I would give her Scotland. I rented a castle, not just any castle; Borthwick Castle, the last home of Mary Queen of Scots. I arrange to stay in Queen’s private apartment and ordered meals fit for a Queen. Marilyn, of course, complained about the expense and insisted that I reduce the number of days spent in the castle. I wanted to make her Queen for a week. She insisted that two or three days would be more than enough. 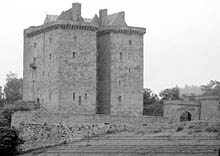 I purchased three gas discharge tubes similar to the tubes by Wilhelm Roentgen when he discovered x-ray. After Roentgen’s discovery, the design of the gas discharge tube was altered by adding a second Anode (Anticathode) to better control and focus the x-ray beam. I purchased a prototype of the first x-ray tube done at a 10 percent scale.
I also discovered the purpose of a pair of red lens spectacles that I had purchased more than 10 years ago. The spectacles were invented in 1916 by Wilhelm Trendleenburg to use with the Roentgen x-ray tube. The red lenses did not protect the users eyes rather, the red lenses made it possible to see the developing x-ray image in greater detail. This bit of information greatly increased the value of my spectacles. They are rare and worth much more than I expected.
I purchased an 18th-century Archimedean Screw that demonstrates early water-lifting technology. Archimedes, a Greek mathematician (278 – 212 BC), is credited with discovering this technique. I purchased a rare birthing doll that was once in the collection of James Simpson (discoverer of chloroform). I purchased 18th-century optical equipment, 18th-century surgical tools, and several anatomic models of the human body.
My visit to this shop lasted just over three hours. All my purchases were carefully packed by Patrick and shipped to me by FedEx. I received my purchases two days after I returned home. I will revisit this dealer at least once each year. In addition, Patrick will introduce me to several other dealers who carry similar items. I hope that this is the beginning of a profitable and long relationship for both of us.
Marilyn and I returned to Edinburgh and visited several dealers who had been recommended to us by Patrick. We managed to buy four more items. Next, we paid a second visit to the golf memorabilia dealer. I have much more to say about this dealer and about the process of adding a new item to my inventory. I will save these comments from my article next month.
Day 8: We visited the Edinburgh Surgeons Museum and another museum with a large display of anatomical models. Purchased three books on the museum’s exhibition and one book on the tools and equipment on display. By midafternoon, we were on the road headed south to our next destination, Alnwick Castle.
A large antique show was being held at this castle the following day. What I did not know is that this is the castle where all the Harry Potter films are made. The castle was a beehive of activity involving costumed characters from the Harry Potter movies and literally thousands of children. Fortunately, the antique show was located on the other side of the castle grounds away from all this activity. The show was large, the merchandise was displayed well, but the prices were three times retail prices. I was not able to purchase a single item.
Day 9: We drove to the Manchester area to attend yet another show. This was a medium-size show. The merchandise was well displayed. We purchased several items that will return a good profit. We met a dealer from Nottingham who is in the process of buying an estate that includes a large collection of medical antiques. This dealer has contacted us since we returned home. She has sent many images of the medical antiques she is about to acquire. I have politely refused her request to make offers on any of the items I may wish to purchase. Instead, I informed her that I would purchase the entire lot but it was up to her to set the price. I also let her know that if she did not want to invest her money in this collection, I would gladly pay her a finder’s fee if I were able to purchase the collection with her help. This collection has more than enough value to warrant a trip to the UK.
Day 10: Spent the entire day driving back to London.
Day 11: Got up early and returned the rental car. We took the Tube to London and visited a large flea market held in the area of London called Camden Town. I purchased many low-end items that I simply call things and stuff. I generally buy such items at 10 cents on the dollar. I will probably make a few hundred dollars on my purchases.
Day 12: Got up early to visit the flea market held at Covent Gardens. I bought extremely well at this flea market. Next, Marilyn and I made the rounds to several large group shops. Many of the dealers from whom we normally buy were on holiday. It was unfortunate for us not to have made contact with these dealers. We did buy a few items from other dealers. By early afternoon we had finished visiting shops.
We decided to try to get tickets to one of the theaters in the West End. Buying tickets to popular shows is nearly impossible with one exception. Seniors more than 60 years of age have first refusal on tickets that the original owners have returned because they are unable to attend. To qualify for these tickets you must prove that you are over 60 years of age and place your name on a waiting list by 2 PM the day of the show. One hour before the performance begins, simply check back at the theater to see if someone has returned tickets. All returned tickets are sold to senior citizens at a cost of 20 pounds each. This is generally one third of the original price. As usual, several people had returned tickets. We were well entertained by the comedy “Avenue Q.”
Day 13: Spent the entire day returning home.