Confessions of an Open Salt Collector 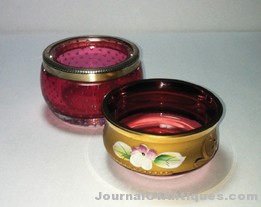 And of all the things that I could have become addicted to, I caught the “Open Salt” bug. Once infected, there appears to be no cure.
My wife picked up a few of these little dishes at garage sales and flea markets many years ago for a dollar. We liked them because they were pretty – cut or pressed glass, hand-painted Nippon, ceramic, wood, pewter, and even silver and gold – and we could display them easily. Then we became acquainted with someone who began teaching us the unique history of each piece. Suddenly, we went from collecting because they were pretty to collecting because of the historical and artistic value of these little dishes that had been around for a few thousand years before saltshakers. We learned that some glass was acid-etched and hand-painted with single bristle brushes to the highest quality hundreds of years ago (Daum Nancy). We found ourselves able to specifically date ceramics and porcelain by their marks and signatures. We learned about the origins of pressed glass and how open salts were some of the original pressings in New England, Pittsburgh and New Jersey, and that we could still find them on the market. We were absolutely and thoroughly hooked.

Now, 4500 salts later, we still find ourselves seeking items for a few dollars in shops and flea markets, but we also appreciate the salts valued at several thousand dollars that are important works of art and history.

We might have eventually been cured of the ‘collecting bug’ had we not discovered a group of like-minded souls, Salt Collectors of the Atlantic Region (OSCAR), one of nine regional clubs under the umbrella of the national organization, Open Salt Collectors. There we found the friendliest people we have ever encountered and were invited to their meetings and homes to see their salts, learn about our mutual acquisitions and generally foster each other’s addiction. 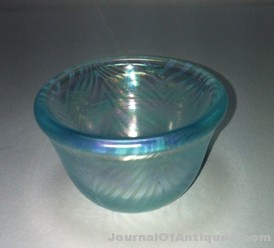 Each of the collecting groups meets regularly, inviting experts in the fields of glass, pottery and metals to speak; we conduct research to further our hobby and buy and sell salts to and from each other. Have you ever seen thousands of salts in a single place?
If you’ve also been infected by the collecting bug why not join one of the regional clubs? Or, join us at the 13th National Open Salt Convention, May 2-5, 2013 at The Newport Harbor Hotel and Marina, in Newport, Rhode Island. All are invited. For more information visit the Open Salt Collectors website, http://www.opensalts.info/

Gems of the Miniature Glass World

One thought on “Confessions of an Open Salt Collector”