Collectible Playing Card Art
Story & Photos by Donald-Brian Johnson
Mary Nastase has over five thousand playing cards. That’s right, five thousand. And for the most part, they’re all different. Well, the illustrated backs are, anyway. As for the “faces” (the sides where the numbers appear), only so many numerical configurations are possible in a deck of 52 cards, even with a Joker or two thrown in. But Mary doesn’t mind. It’s those illustrated backs, a veritable cornucopia of colors, patterns, photos, and artwork, that really interest her, and she’s not alone.
A cheery sunroom in Mary’s Nebraska home is bordered with cabinets and shelves; each contains pile after pile of loose-leaf binders. Those binders are categorized by topic (“cats,” “celebrities,” “politics,” and the like). Appropriate cover art announces the subject inside… and inside is where Mary’s five thousand cards await, each card carefully encased in its own clear-pocket sheet protector.
When you collect five thousand of something – of anything – you have to stay on top of things. Organization is a must, thus all those meticulously maintained binders. But according to Mary, in the collecting world, five thousand cards is really just small change. There are lifelong collectors, whose treasure troves can be conservatively estimated at thirty thousand cards – and up!
House of Cards 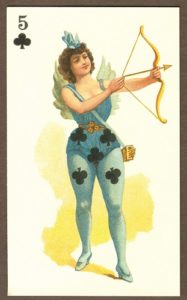 So how does this fascination, with the side of the card most gamblers never pay much attention to, actually begin? For Mary, it started in childhood: “During the 1940s and ’50s, many kids in school traded playing cards the way others traded baseball cards. You could pick up a package of ten “overruns” (cards with a blank “face”) for just a dime. So it was a very affordable hobby. Of course, we eventually grew up, and forgot all about it. Then, some years back, my sister and I renewed our interest. We began searching out cards at garage sales, encountered other collectors, learned about the “CPCC” and were on our way!”
For the uninitiated, CPCC stands for the “Chicago Playing Card Collectors, Inc.” It’s the best-known club for card-aholics from across the nation, and around the globe. Each year’s CPCC Convention is eagerly anticipated by those who just can’t wait to learn more about their hobby, share their latest “finds” – and, of course, trade cards.
That’s one of the nicest things about card collecting. Just as in Mary’s childhood, amassing playing cards remains one of the most affordable pastimes imaginable. Once you think about it, the reason is simple: each complete deck contains 52 cards, (plus at least 2 Jokers, and the occasional advertising card) – and each collector only wants one card.
After all, in a single deck, the decorative backs are, out of necessity, all the same (even slight visual differences would give an “edge” to those putting the cards to their intended use.) So, once a card collector has selected a prime example for his or her collection, that leaves at least 51 of the same cards in need of a home. And, of course, every other collector is in the same boat. The solution: “trades,” whether by mail, online, or in person at the CPCC Conventions. It’s that 1940s-1950s schoolyard swap all over again, newly invigorated for the twenty-first century.
Marked Cards
Some collectors up the ante, by narrowing their search to a very specific type of playing card. The card face must be a “Joker”… or a “spade Ace”… or a “Court Card” (King, Queen, Jack)… or of a specific suit (“hearts” are perennially popular). The decorative card back must, in some cases, conform to a specific subset of a basic theme. In other words, it’s not enough to collect “dogs,” those dogs need to be Scotties. The “pinups” on glamour girl cards must be by famed illustrator Vargas. As for “celebrity” cards, some collectors make things more challenging, by limiting those celebrities to movie stars. Or better yet, to movie stars of the 1930s. Or, best of all, to movie stars of the 1930s who happen to be Shirley Temple. Unlike many collecting fields, when it comes to playing cards, the mania is what you make it.
Of course, limiting the collecting scope also means eventually exhausting the free-swap options. In such cases, the determined card collector is more than willing to pay – but even then the stakes are low. Going rates are rock-bottom, except for antique cards, and in-demand cross-collectibles. (Favorites among the cross-collecting crowd: cards depicting Elvis, the Beatles, the Dionne Quintuplets, Princess Diana and ex-hubby Prince Charles, little Shirley, Coca-Cola girls, and the Kennedys). The average price for an average card, however, is just 10 cents. More valuable cards go for a quarter each, with the most rabidly sought-after topping out at a dollar.
Coupled with free “swap” cards, it’s easy to see how a card collection can quite easily, and quite quickly, stack up into the thousands. At those prices, even folks who haven’t picked up a deck of cards since the days when they played “Old Maid,” may find themselves tempted to take up card collecting. (And yes, there are indeed subcategories just for those who collect specific “card game cards”, like Canasta, Rook, UNO, and kids’ games, including – well – “Old Maid!”)
Lost in the Shuffle
Accustomed as we are to the look of modern playing cards, it’s easy to forget that they didn’t spring forth fully formed at the dawn of the twentieth century. Like everything else in life, playing cards have their own back story. And here, thanks to the CPCC, it briefly is: 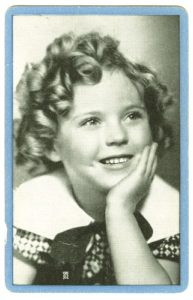 If you’re looking for examples of these early cards, you’ll be doing most of your looking in museums. Few show up on the resale market. Those that do are on the order (and in the price range) of high-end art rather than affordable collectibles. However, from the late 1800s onward, mass-manufacture brought cards within the grasp of almost every budget. And even then, playing cards weren’t just for play. During the Victorian era and early 1900s, families enjoyed filling scrapbooks with anything remotely scrap-bookable. Postcards, postage stamps, catalog illustrations, holiday greetings – and playing cards – eventually found their way into memory albums. Thanks to that early obsessiveness (and despite the paste remnants), today’s card sharps now have over a century’s worth of playing card visuals to choose from, and hopefully obtain.
Nowadays, the most popular retail outlets for new playing cards are truck stops, airport gift shops, sundry stores, and art museums. Vintage decks lurk at flea markets and garage sales, as well as in your own attic, or tucked away in the drawer of that long-forgotten end table. Start searching, play your cards right, and you may soon be hooked on the hobby.
Wild Cards
Playing cards come complete with their own array of fascinating, bet-you-didn’t-know-that, trivia. Courtesy of the CPCC’s Glossary of Card Collecting Terms, here’s an assortment to toss out across the bridge table the next time the gang gets together:

Holding All the Aces
The CPCC wisely reminds its members of “the cardinal rule:” collect what pleases you. When it comes to collecting in general, and card collecting in particular, that advice is the verbal equivalent of a royal flush – a full house – an ace in the hole – a trump card! For the dedicated playing card collector, success is, most definitely, in the cards.
Founded in 1950, the CPCC (Chicago Playing Card Collectors, Inc.) publishes a quarterly newsletter, a variety of catalogs, and hosts an annual convention. Full details on the club, its activities, and the convention – plus lots of fun facts about playing cards ñ can be found on the club website: cpccinc.org
Playing cards courtesy of Mary Nastase.
Donald-Brian Johnson is the co-author of numerous books on design and collectibles, including Postwar Pop, a collection of his columns, and an upcoming second volume. The only card game he is reasonably familiar with is “Go Fish.” Please address inquiries to: donaldbrian@msn.com.