In January 2020 we said goodbye to the house we had lived in for the past ten years. The house we had poured our love, sweat, and tears into. The house we had brought our children home to. Because we didn’t have a new house to be excited about yet, most of our furniture went into storage while we moved into a small rental as we figured out what was next.

This was a pretty exciting but scary time for us. We knew our next house needed to be special because we were never moving again.

Then, it happened. Our agent suggested we go see a (very) big (very) old house that was out of our price range and needed a lot more work than we wanted to take on. She knew my weakness for old houses, but I also wanted move-in ready with a pool. This house did not check those boxes, but she assured me it was special and worth checking out. “It can’t hurt to look.” Famous last words.

Very long story short, we bought it. Our closing was delayed repeatedly because the Covid shutdown had begun. This gave us plenty of time to second guess the biggest decision we have ever made. Were we crazy? Could we do this? What was even happening in the world? Was the market going to crash? Should we wait? I asked myself these questions a few hundred times a day for months. But on April 20, 2020, it became ours. The rest is history.

Speaking of history, this house has it. From what we can tell, it was built in 1740. We never imagined we would live in a home older than the United States itself but now we do. Six families have owned it before us and now we are part of its long history, and it is most certainly a part of ours.

People love our house. So many people tell us that they wanted to buy it. Sort of. And I laugh because we were the only ones crazy enough to actually do it. She is beautiful but I always tell people “She’s a handful.” That’s an understatement. When you live in a very old house it’s almost as if the house is another member of the family with its own need for constant attention. When someone asked me what I do for fun recently I was a bit puzzled. “I live in a 280-year-old house. I pretty much just do that.”

The Exploits of Taking Control

Our home sits on 30 acres with conservation land on three sides and had not been lived in full time for close to three decades. The house was relatively well taken care of, but Mother Nature had made herself at home around the property and in some cases, inside the house. “Mature landscaping” had been on my house wish list, and it did have that. We love the majestic maple trees, perennial flowers, the sunken rock-walled garden, and the gigantic hydrangea bushes. But we also inherited equally mature invasive species and spend a lot of our time battling them.

One time a piece of Japanese knotweed came up between the floorboards in the parlor! It was one of many times I questioned if we could really make this work.

The neighborhood wildlife had also made itself at home in the house over the years. Early on we discovered we had 200+ bats in the attic. We had them humanely “excluded” and two years later they are all back. We are in a constant battle with mice. Quite a lot of mice. And we have a very healthy snake population that is here to help. Recently, one (very small) snake managed to climb up a radiator pipe from the basement to our second-floor bedroom. This was another one of those moments where I questioned our life choices. I’ll also never forget the days that a porcupine and a weasel visited me in the carriage house.

Every day is an adventure!

It’s All in the Approach

There are always discussions within the old house community about restoration vs renovation. People have very strong feelings on both sides. We have found ourselves somewhere in the middle. We care deeply about the house and our top priority is making sure it survives another 100+ years. We don’t want to destroy any original details, but the house has already gone through many changes over the years and will continue to evolve with us.

While it seems like we have been working non-stop for over two years on this little pandemic project of ours, the progress has been slow. At least that is how it feels sometimes. On HGTV and even in real life, old houses are often bought and immediately gutted to make all the changes the new owners want to make at one time. I can see the appeal. Logistically, updating things all at once makes sense. For better or worse, that is not the route we have taken.

Living in a house while slowly updating it over many years is not for the faint of heart. You don’t really get a break. You are always thinking about the things you haven’t done yet. You never know what will suddenly become an unexpected priority. But it also means you get to know your house and how you live in it before doing anything rash. And when things do get completed, I like to think the success is a little bit sweeter. In between all of our projects, mini-disasters, and wildlife adventures, we have already come a long way in turning the house into a home that we love.

Most days I would tell you I have no regrets. We are honored to live here, and we have learned a lot about old houses and ourselves along the way. On an off day, well, maybe just don’t ask! And if you do ever find yourself considering a very old home for the first time, here are some tips.

• Make sure you have the time, energy, and money it will require. You don’t want to be the one that lets the house deteriorate. I have heard people say to estimate what you think it needs and then double the time and money you expect it to take.

• In today’s housing market, waiving inspections is the norm. With an old home that can be a huge risk. If a house has sold in the last few years, it may be safe to make some assumptions about its condition. But if it has been in the same family for 90 years (like ours) it’s important to know what you are getting into.

• Be prepared to pay a lot for homeowners’ insurance. I expected it to be high but not as high as it is.

• If you are in a committed relationship, make sure your partner wants it too. Old houses require a lot of communication, teamwork, and sacrifices. I’ll just leave it at that!

• If you have young children (or plan to), there are many safety concerns to consider. Lead paint and asbestos are not uncommon in old houses. They don’t have to be a deal-breaker but are something to be aware of and become educated about.

• Learn the history of the house and the families who lived there. This is something my kids have really enjoyed.

• Take lots of photos because some days looking at how far you’ve come is the only thing that helps you to keep going.

• Do your best to enjoy the process, embrace the chaos, and take breaks when you need to. Think of all you’ve accomplished. 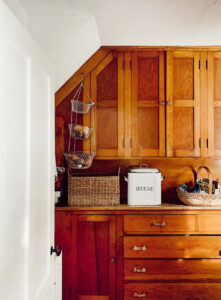 The walkthrough pantry to the dining room was one of the things that made me fall in love with the house.

The Big Dawgs of Salvage