by William Lipovsky, First Quarter Finance, firstquarterfinance.com
Pewter is a metal alloy of tin and lead, but it’s mostly composed of tin. Tin prices generally fluctuate between $7 and $11 per pound. When selling for scrap, you can expect to get roughly 50% of the current price – so scrap pewter, therefore, is generally worth around $3 to $5 per pound at a scrap yard.
Your pewter items can have value for what they are, beyond just the base value. There is a lucrative market for pewter kitchen items and decorations. Examples of these include tankards, mugs, saladware, flatware, pots, or candlesticks. You can browse eBay’s collectible pewter metalware page or simply Google “pewter for sale” to get an idea of what items are out there and what they sell for, and how your own pewter items compare. The value of any given pewter item will depend on its age, condition, brand, and other factors. 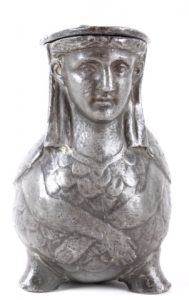 Antique and vintage kitchenware and figurines can sell for surprising amounts of money. The most popular kitchenware items are tankards or pots. There are many different types of pewter tankards, so it’s best to know which features belong to a particular antique era. For example, the earliest known pewter tankards had thumb pieces instead of footed rims or handles. These older models will fetch the highest price on the market.
Pewter was also a popular material for making figurines. Most figurine companies used pewter due to its pliability and aged appearance. Some popular figurines were those depicting stage coaches or cowboys. An antique, collectible figurine in good condition could sell for over a thousand dollars.
Identifying Pewter
Pewter is usually silver in color, but could be a bit more bronze colored if less lead was used to make the alloy. Your pewter items might have certain markings on them that can help you identify their value and authenticate the pieces by defining the marks on different pieces. Beware of reproductions.
Writing, labels, and marks on your pewter can help you identify your item’s collectibility and age. Marks you can find on pewter include touch marks, maker’s hallmarks, quality marks, labels, and catalogue numbers. These marks are incised by the manufacturer who made the item and additional marks can be placed if the item is imported from abroad. Even if your pewter piece doesn’t have markings, that doesn’t mean it isn’t valuable. According to the Pewter Society, many high-quality pewter pieces weren’t marked at all.
Touch marks identify the pewter maker. Usually, they are a thumbprint, fingerprint, or initials. Hallmarks mimic the hallmarks left on silver because newer pewter has a similar color. But, they don’t actually mean anything, as pewter purity isn’t measured like silver. Quality can help identify age – a crowned rose was used in the mid-16th century and an X was used after that. After the 18th century, quality marks lost their significance. Labels might identify where a pewter item was made, but they aren’t always accurate. Numbers are most common on pewter from the 19th and 20th centuries, when pewterers numbered their pieces to be part of a catalog. And, capacity marks like “pint” or “quart” became required by law in 1836, so anything with such marks was very likely made after 1836.
Reproductions, Fakes, and Forgeries
Depending on the type of reproduction, some items may or may not have been made to deceive buyers. Marks on pewter might be helpful identifiers, but most of the time there was no regulatory body in place to ensure that pewterers put truthful marks on their pieces.
Know your pewter terminology. With respect to pewter, “reproduction” refers to any item that was made following the same production methods and using the same materials as older models. “Forgeries” are usually made from molds of real collectibles, so they carry all the same blemishes and marks. And, “fakes” are most commonly authentic, unmarked items that have later been illegitimately marked. “Fakes” may also have been decorated to appear antique.
How to Sell Pewter
The best way to sell pewter is through your nearest certified antique dealer or through antique fairs and shows. The Pewter Society holds two auctions a year exclusive to its members. Antique dealers specializing in metals have the expertise to appraise the item and give you a ballpark selling figure. When navigating antique fairs, keep an eye out for true pewter specialists, otherwise the best items or prices may not actually be available.
There are also several online resources for pewter sale, such as pewtersellers.com and pewtersociety.org (mentioned above). Online sites like eBay, Etsy, and RubyLane are another great way to sell. You can browse eBay’s collectible pewter page to compare your own pieces to and get an idea what yours might sell for if you sell alone and don’t go through a dealer.
Geographical factors can also play a large role in how well an antique may sell. It is usually best to sell the pewter in its country of manufacture; this is where the most interested buyers and best prices will be found. Pewter made in the British Isles will sell well in any English speaking country, but American pewter is going to sell best in the United States. Within the United States, markets vary based on region. For example, pewter from the Midwest will sell best there, while eastern or southern pewter sells best nearer the Atlantic. 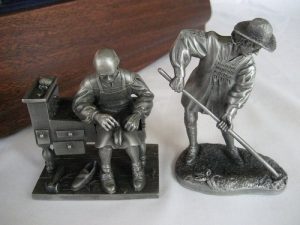 It’s important to take the time to get high quality, professional photos of your pewter if you’ll be selling it online or using photos to advertise. The photo of the item can make or break a sale. Photographs should have good lighting and focus to accentuate color and texture. The surface condition of the pewter is very important to buyers, so take notice of dents, scratches, or random patches of corrosion; these will decrease the value of the object. On the other hand, a thorough chemical cleaning, some polishing, and the proper discoloration can be major selling points.
In Summary
Pewter is an alloy of tin and lead. While it doesn’t have the metallurgical value of silver or gold, it can be worth a significant sum depending on its age, condition, and manufacturer. Check for marks, clean your pewter well, and you can sell it through an antique dealer or on eBay, two of the easiest options. If you have pewter that is only worth scrapping, you can find a local scrap yard and check their prices with the iScrapApp.
William Lipovsky Founder and CEO of First Quarter Finance. His writing has appeared in other respected publications, such as Forbes, Yahoo Finance, and Investopedia. He is also published in the U.S. Department of Defense’s Defense Technical Information Center Journal. For more posts on his site visit firstquarterfinance.com.

Pewter: Is It Worth Anything?

Examples of Pewter Items For Sale
Early examples of pewter are experiencing a renaissance among collectors, especially among younger collectors, due to the simplicity of style, utilitarian nature, and that it blends easily with modern living as a “link with traditional heritage and as a living craft.” (deutscheshaus.cc) According to the Pewter Collectors Club of America, “Considering the amount of American pewter which once existed, alarmingly little has survived to the present.” Following are examples of how this blended metal is selling today.
Antique Figural Pewter Tankard:
This antique figural tankard based closely on an 1882 claret jug designed by Victorian silversmith, Alexander Crichton depicting a mythological creature called a “Harpy.” A Harpy is a half-bird, half-woman creature of Greek mythology, often portrayed as a woman with bird wings and legs. The figure here has a neo-classical woman’s face and arms with the body and wings of a bird. The figure is supported by three short legs. The head has a hinged cover with a thumb-piece. Underneath the cover are what appear to be museum markings which include numbers and initials. The tankard has substantial heft and is in very good condition; it measures 8.5” long x 6.25” tall x 4.5” wide. Auction estimate is $150-$300. North American Auction Company.


American Pewter Candlesticks:
These pewter candlesticks are unmarked but from the craftsmanship the dealer determined these to be from the mid-19th century. They feature domed bases, shafts with sharp turnings, and removable bobeches. 7 1/4” high, in good condition with minor denting. Selling on Ruby Lane for $140.
Medieval Pilgrim Signs in Pewter:
This very nice lot has a number of insignia pins, a cross, and medallion lock. Pin with a flower on the corners, a particularly nice pin in the form of dice and a cross with the image of Jesus. The estimate is $170 – $230 for this lot from an auction in the Netherlands.
Antique Colonial Pewter Spoon Set:
Five 17th century or newer European pewter spoons with spoon rest, sometimes called “Puritan spoons” or “Colonial Spoons,” are pewter soup / chowder spoons with round bowls and original pewter patina. Quality mark of Ore Angel Michael, a mark which first appeared in the 17th century. The mark is impressed on the front of each handle in the bowl. There is no maker’s mark. For sale on Etsy for $298.


Franklin Mint Figural Pewter Set:
This is a set of fine pewter figures made by The Franklin Mint with a lovely storage and display case. The figures were manufactured in 1974 and 1975. This collection of 13 figures is titled “The People of Colonial America.” They portray the men and women of early colonial America in their daily work routines. Each figure is stamped on the bottom: The Franklin Mint, (Occupation) or title of figure and date minted (1974 or 1975). The figures range is size from 3 1/4” to 4 1/2” tall. Selling on RubyLane for $199.

Bergdorf Goodman “Tutto E Possibile” (Anything is Possible) Box:
This is a handcrafted pewter box made in northern Italy, lead-free and safe for everyday use, measuring 4.5” W x 3” D x 1.2” T and priced at $168.

You are Only as Good as Your Books