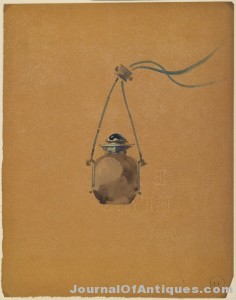 Glass is a wonderful substance. Everything makes it an incomparable plastic medium in the hands of an ingenious artist, offering his imagination and talent almost limitless scope for discovery.
–René Lalique1
From 1884, when his first jewelry designs were displayed at the Musée du Louvre, until his death, René Lalique (French, 1860–1945) created stunningly beautiful and original objects, first in the Art Nouveau style and later in the Art Deco style. He embraced change, set fashion, and created and nurtured a company whose products were made not only for the rich and powerful, but for the middle-class consumer.
Lalique was a master artist and designer who sought to create beautiful objects that incorporated a variety of materials. But the medium he preferred was glass. He studied the properties of glass in order to achieve his artistic vision, and he used a variety of glassmaking techniques to make his works. Although Lalique was an innovator in the mechanized making of glass objects, it would be incorrect to identify his works as mass produced, for every object was handled by hand at multiple stages of its production. This customized production is what sets Lalique glass apart in beauty and quality.

Commissions and Architectural Glass (1926–1945)
Lalique received numerous major commissions for decorative architectural glass for buildings, luxury cruise ships and trains in the 1920s and 1930s. Among these commissions were the decorative glass panels depicting blackbirds and grapes that he designed around 1928 for the Le Train bleu, or the Blue Train, which featured dark blue sleeping cars. This luxury train was built and operated by the Belgian International Sleeping-car Company, owners of the famed Orient Express.
In 1932, Lalique created a large sandblasted glass panel for the Wanamaker’s Men’s Department Store in Philadelphia. John Wanamaker opened Wanamaker’s Department Store in 1877, which was the first department store in Philadelphia, and one of the first in the United States. In 1932, the Men’s Store opened a few blocks away.
With the Great Depression of the 1930s, the international market for luxury goods declined, causing Lalique to permanently close his Combs-la-Ville factory in 1937. Three years later, World War II forced the temporary closure of his factory at Wingen. Lalique died on May 9, 1945, at the age of 85, the day after the Allied victory was declared. The Wingen factory was reopened by his son, Marc Lalique, later that year, an effort that ensured the survival of his father’s company to the present day. 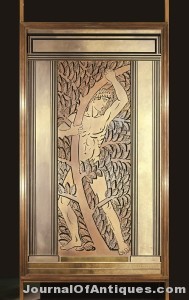 The Story Behind Lalique