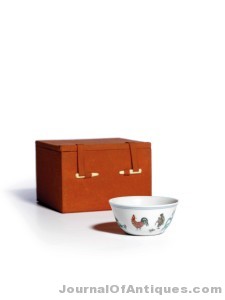 A rare Chinese Ming dynasty porcelain cup decorated with chicken images (hence its nickname the “Chicken Cup”), dating to the 15th century and one of only 19 known to exist (and one of only four in private hands), sold for $36 million at a five-day Spring Sale Series held April 4-8 by Sotheby’s in Hong Kong. Also, the Hutton-Mdivani necklace, a highly important jadeite bead, ruby and diamond necklace, made by Cartier circa 1933, realized $27.44 million, a new world auction record for a Cartier jewel. Both prices include the 12 percent buyer’s premium.