The Feeling of Love and Respect for the Red, White, and Blue 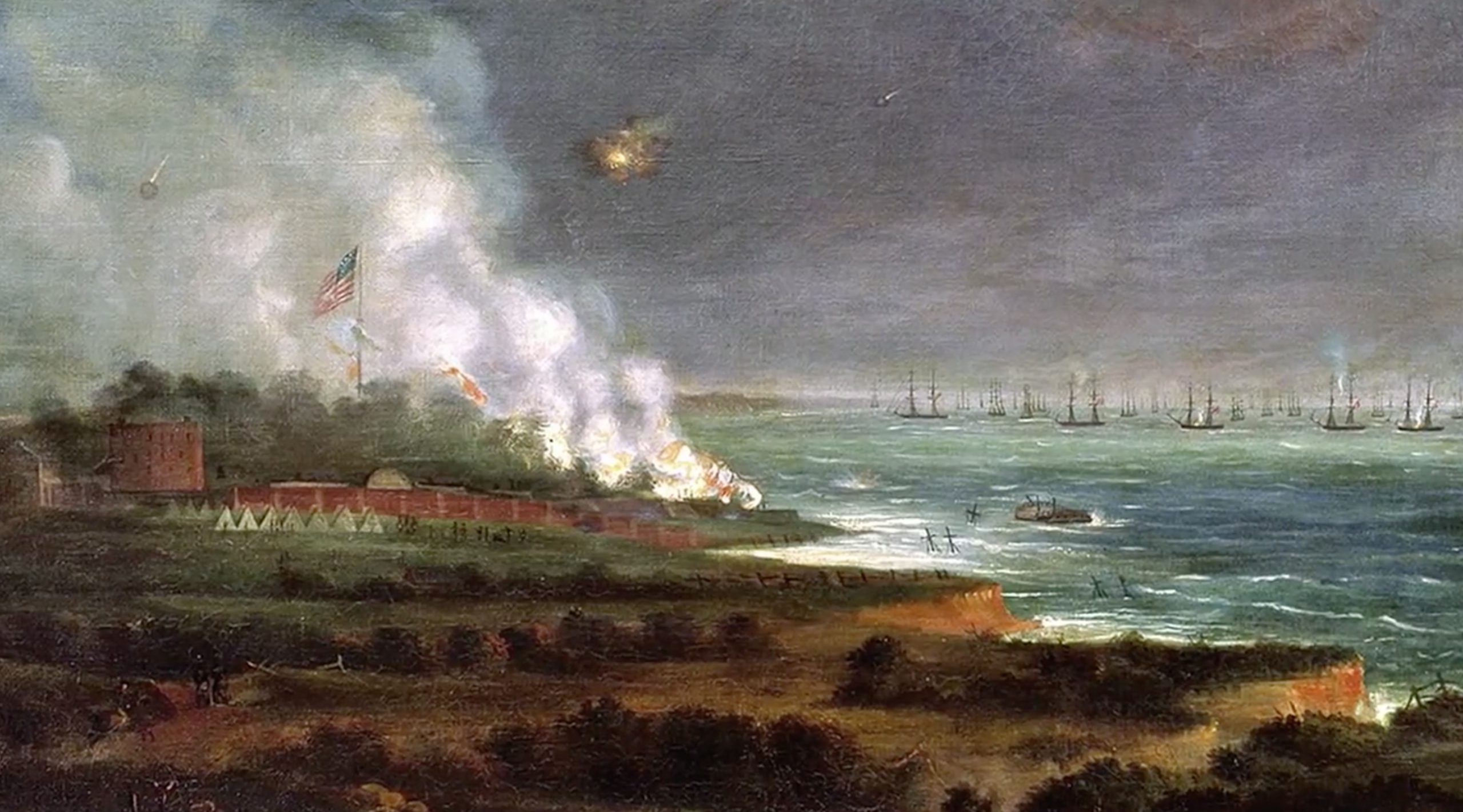 Alfred Jacob Miller’s The Bombardment of Ft. McHenry. This event is said to have served as the inspiration for The Star-Spangled Banner by Francis Scott Key
photo: Maryland Historical Society

When it comes to the creation and design of a nation’s flag, many say it must be able to inspire people to love and respect it. Think of the image of the flag at Iwo Jima, Ground Zero, the image of the painting Bombardment of Fort McHenry where Francis Scott Key wrote The Star-Spangled Banner – where the stars and stripes take center stage and invoke a love of country and fellow citizens. This feeling is referred to as the “Cult of the Flag.” 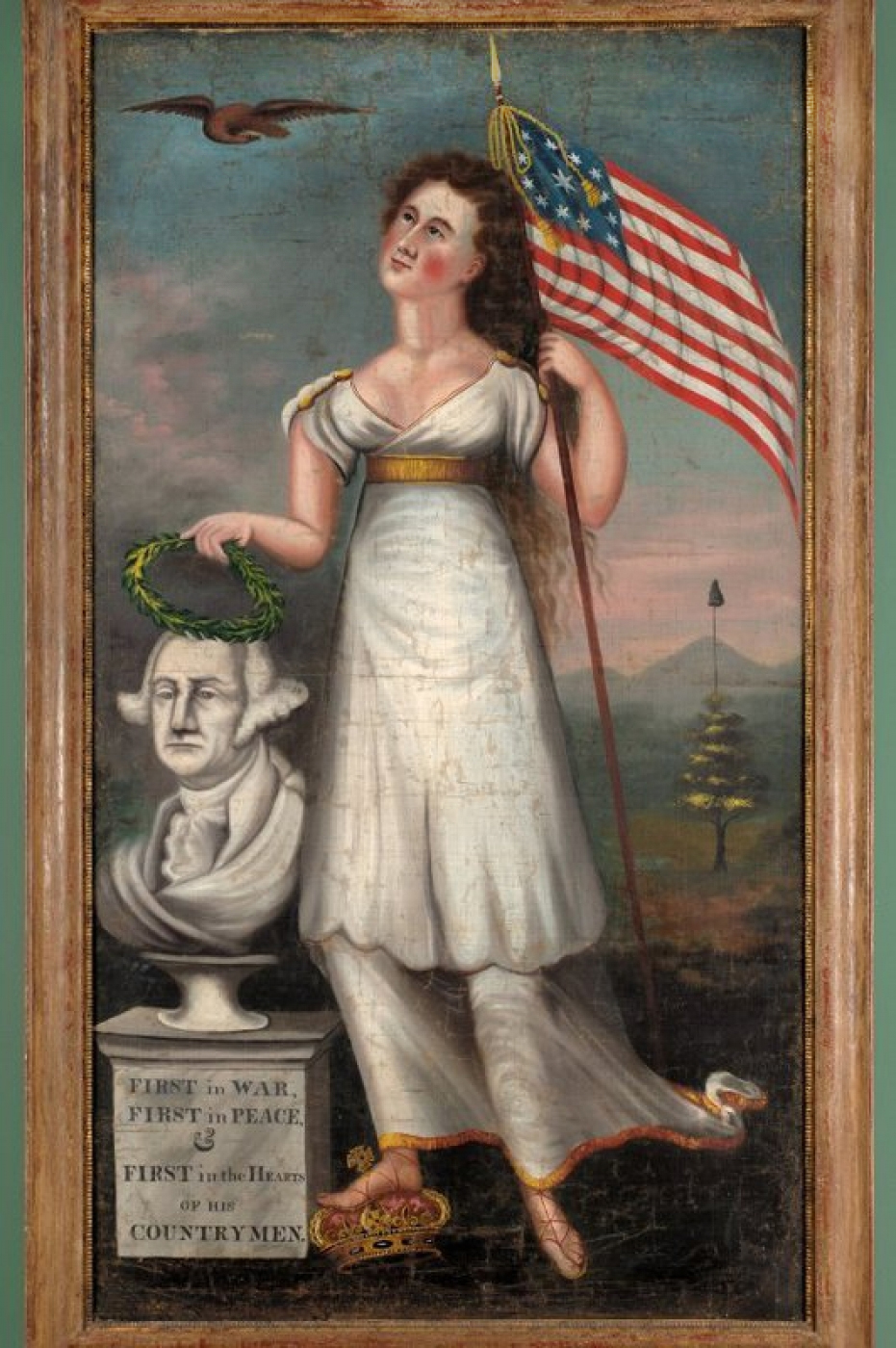 During the Neoclassical Period (1780-1830), Liberty was often depicted as a Roman goddess and used to symbolize the United States. This rendition of Liberty incorporates many well-known patriotic symbols, including the American flag, Bald Eagle, white pine tree, Liberty pole and cap, laurel wreath of the classical victor, bust of Washington, and Crown of Tyranny upon which Liberty tramples. The object was reportedly used as a window shade in a Connecticut tavern. It was collected in the 1920s by Elie Nadelman, a modern sculptor who, with his wife, formed one of the earliest and largest folk art collections in the United States.
photo: Fenimore Art Museum

The Age of Revolution

The year was 1775 and war with the British had begun. How did the rag-tag groups of the first Revolutionary War fighters identify themselves? It was not under the stars and stripes but under flags identifying what unit or regiment they were fighting with as battles erupted across the country. The Washington Cruisers used a white flag with a pine tree and the words “An Appeal to Heaven” written beneath. The Continental Marines used the Gadsden Flag (a yellow flag with a snake and the words “Don’t Tread On Me”) and the Moultrie Flag (a blue flag with a white crescent moon and the word “liberty” written into the white with blue lettering). The Green Mountain Boys had a green flag with a corner of blue with thirteen stars representing the Colonies. These and many other flags showed the regional pride the soldiers had while fighting the British and the symbols helped to document who fought in what battles.
As the war continued to unfold, the Second Continental Congress met in Philadelphia in June of 1775 to create a united militia known as the Continental Army and named George Washington as its commander-in-chief. A flag called the “Continental Colors” featured thirteen red and white stripes with a Union Jack in the canton, or upper left corner, of the flag. According to United-States-Flag.com, “Records show that Philadelphia seamstress Margaret Manny sewed the first Continental Colors for the USS Alfred, and in December of 1775, the flag was raised for the first time on any fighting vessel. A year later, the flag was considered the official flag of the American naval forces by the Maritime Committee of the Continental Congress.” And according to David Martucci, past-president of the North American Vexillological Association, “It was sort of a compromise between the radicals who wanted to see a separate nation and the people who were more conciliatory and wanted to see some accommodation with the crown.”

Some sources state George Washington commanded the Continental Colors to be raised on New Year’s Day during a siege on British-occupied Boston, but others say Washington knew raising a flag with a feature of the British flag incorporated as an element of the design was probably not a great idea.
It was not until June 14, 1777, that the Second Continental Congress took the time to pass a resolution which stated “the flag of the United States be 13 stripes, alternate red and white” and that “the union be 13 stars, white in a blue field, representing a new constellation.”

Did Betsy Ross design and make the first U.S. Flag? Well, believe it or not, the jury is still out on this question. The legend and very pretty story that is told says Ross created the first flag in 1776 after a visit with George Washington. Sources of this information remain scarce, although Ross’ grandson William Canby did a presentation to the Historical Society of Pennsylvania in 1870 stating his grandmother did truly make the first flag.
According to Canby, Ross was visited in late May or early June 1776 by Washington, financier of the war Robert Morris, with Colonel George Ross, a relative and signer of the Declaration of Independence. During the visit, a sketch of the flag was given to Ross showing red and white stripes but the canton had thirteen six-pointed stars strewn about the space. She made a few design suggestions, including placing the stars in a circle and making them five-pointed instead of six, and the first of over 12 iterations created over time came into focus. On June 14, 1777, the flag known today as the “Betsy Ross” was officially adopted by Congress as the national flag. 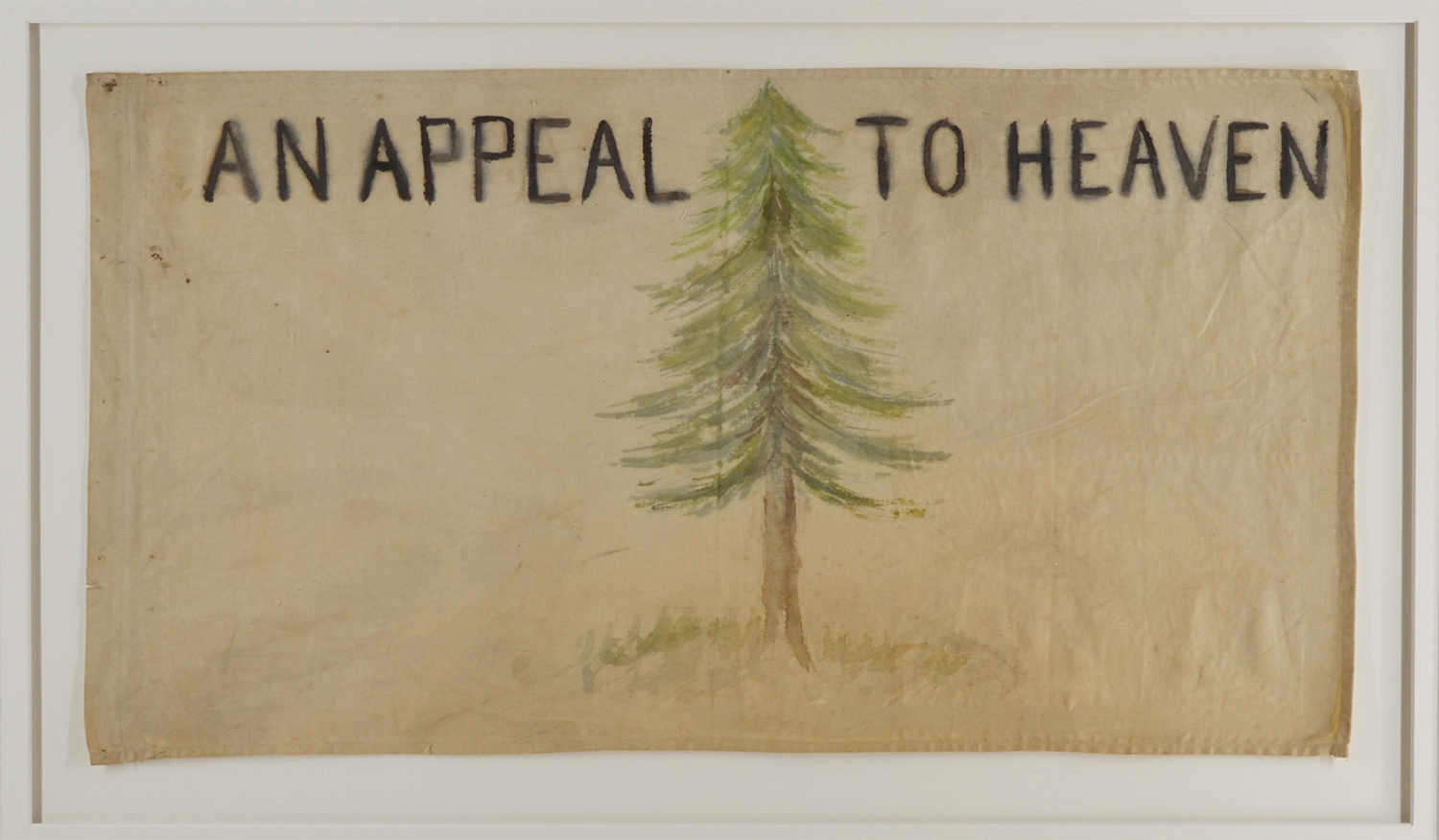 Vintage hand made, hand painted Revolutionary War Flag. The original was one of the first flags to appear in a battle with the British. This one is rare and unique as it was most likely as school project but still very rare to have survived. Selling for $1,450 on Etsy Noted as one of the most unusual flags that Bonsell Americana have ever handled, this thirteen-star Betsy Ross flag with twenty-five stripes, rather than the standard thirteen. Such a large number stripes is extraordinarily rare–a trait seen in perhaps 1 in 1000 antique flags. Though the exact meaning is impossible to know for sure, one can reasonably speculate that this flag may have been used to commemorate the centennial of the twenty-fifth state admitted to the Union, Arkansas, in 1936. Selling for $4,750 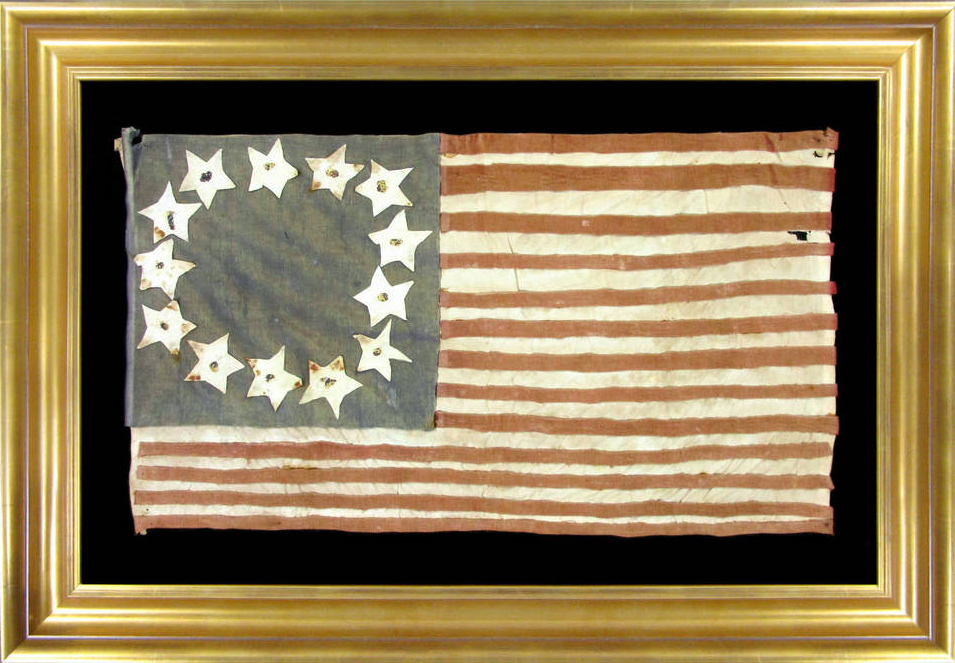 Noted as one of thee most unusual flags that Bonsell Americanna have ever handled, this thirteen-star Betsy Ross flag with twenty-five stripes, rather than the standard thirteen. Such a large number of stripes is extraordinarily rare-a trait seen in perhaps 1 in 1000 antique flags. Though the exact meaning is impossible to know for sure, one can reasonably speculate that this flag may have been used to commemorate the centennial of the twenty-fifth state admitted to the Union, Arkansas, in 1936. Selling for $4,750. 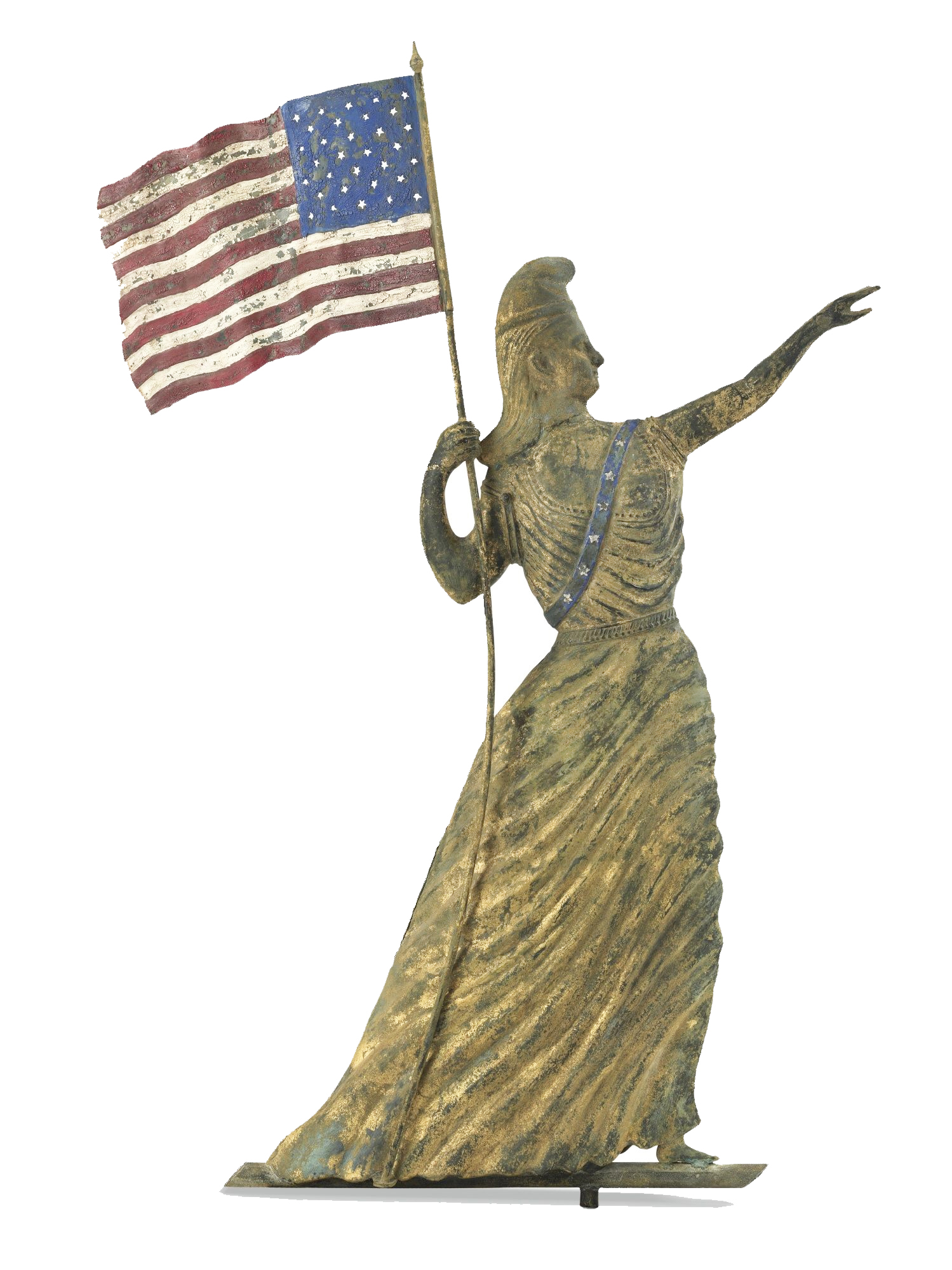 Gilt and Painted Molded Copper Goddess of Liberty with Flag Weathervane, Possibly by J.L. Mott Ironworks, New York, circa 1880s, sold for $125,000 in 2017 at Sotheby’s 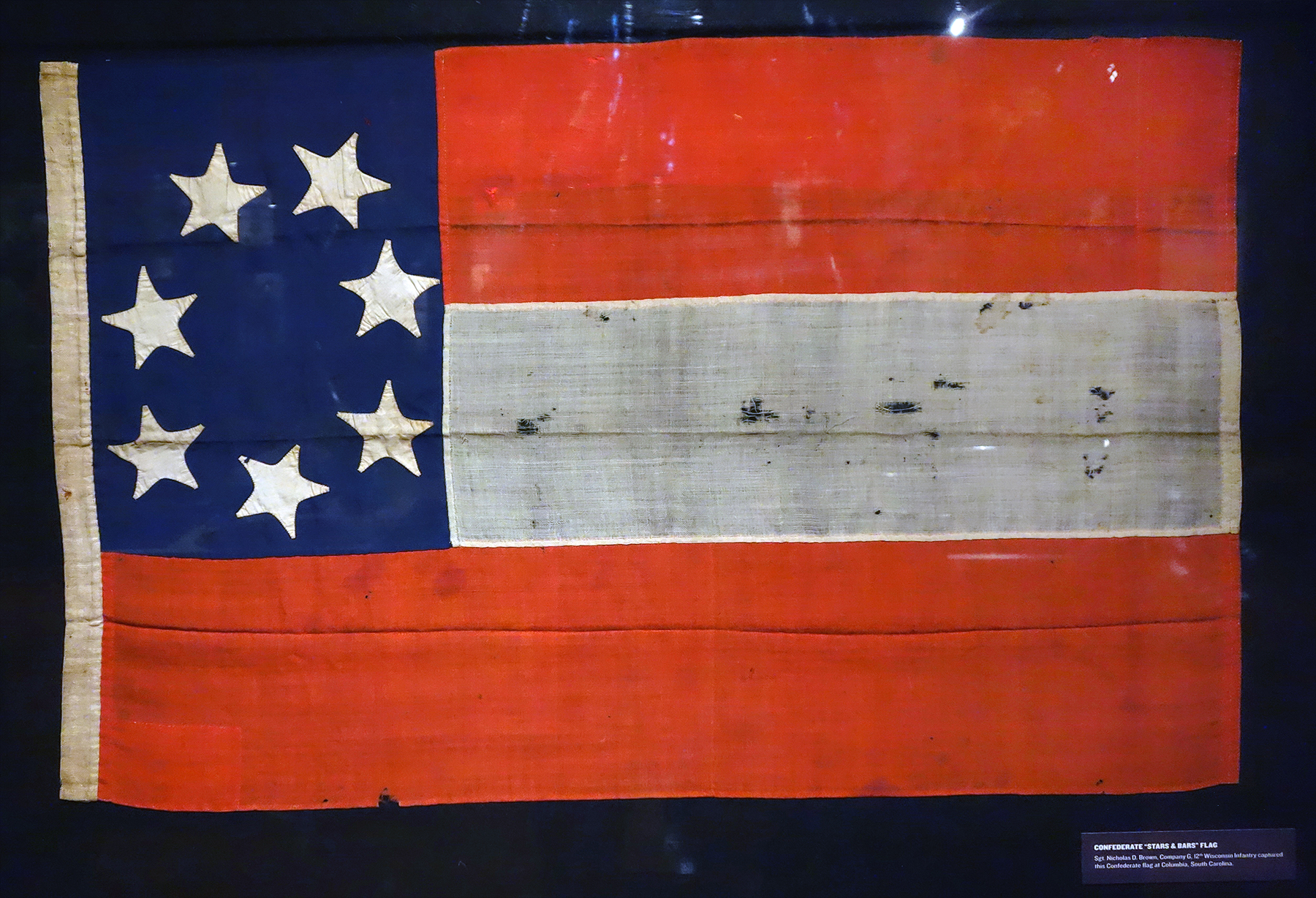 The Flag in Every Form

Beyond the flying of the flag around the world, its depiction in fine and folk art, on clothing and on just about any surface you can imagine continues to inspire artists, designers, makers of souvenirs and fine glass over these past 244 years of being a country. The most notable genre of flag depiction is its use in Folk Art.
While flags made during the start of the Country are far and few between, they are still being created today in modern fabrics like Sunbrella to help prevent fading and triple-sewn-edged nylon to help prevent ripping. Do not expect any flag to last forever in the outdoors as the elements can be brutal. On average a flag, if flown outside, would need to be replaced at least once per year.

Despite the lack of official documentation to support this story of the first flag, the legend as put forth by Canby was published in Harper’s New Monthly magazine in 1873 and was quickly assimilated into school curriculums across the country. Backing up the general idea in this story is the fact that Ross did make flags. A receipt for 14 pounds being paid to Ross on May 29, 1777 states she did make “ships colours” for the Pennsylvania State Navy.
History.org also shares that Francis Hopkinson, a New Jersey delegate to the Continental Congress and signer of the Declaration of Independence, is also cited as having played a role due to the fact that in 1780, Hopkinson sought payment from the Board of Admiralty for his design of the “flag of the United States of America.” However, his petition for payment was denied because “he was not the only one consulted” on the design.

The Flag On Display

It is hard to imagine that the flag was not on display in every building, in every home, on wooden poles across the country following the Revolutionary War. The sense of pride or the “cult” of the Flag did not truly come to a head until the Civil War broke out in 1861. At that time, the Union held the flag as its own, creating a “rally ’round the flag” effect as its call to arms.
On the Confederate side came a host of designs for a variety of flags flown for different divisions of the Confederate armed services. From Stars and Bars (with 7, 9, 11, and 13-star versions) to the first Confederate Navy Jack, the Bonnie Blue Flag, the Biderman Flag, along with dozens of others. The “Old Dixie Flagî or the commonly called “Confederate Flag” is really a design used by several southern states that was popular with several different infantries, but the variety of flags feature almost 100 different designs on one flag website. 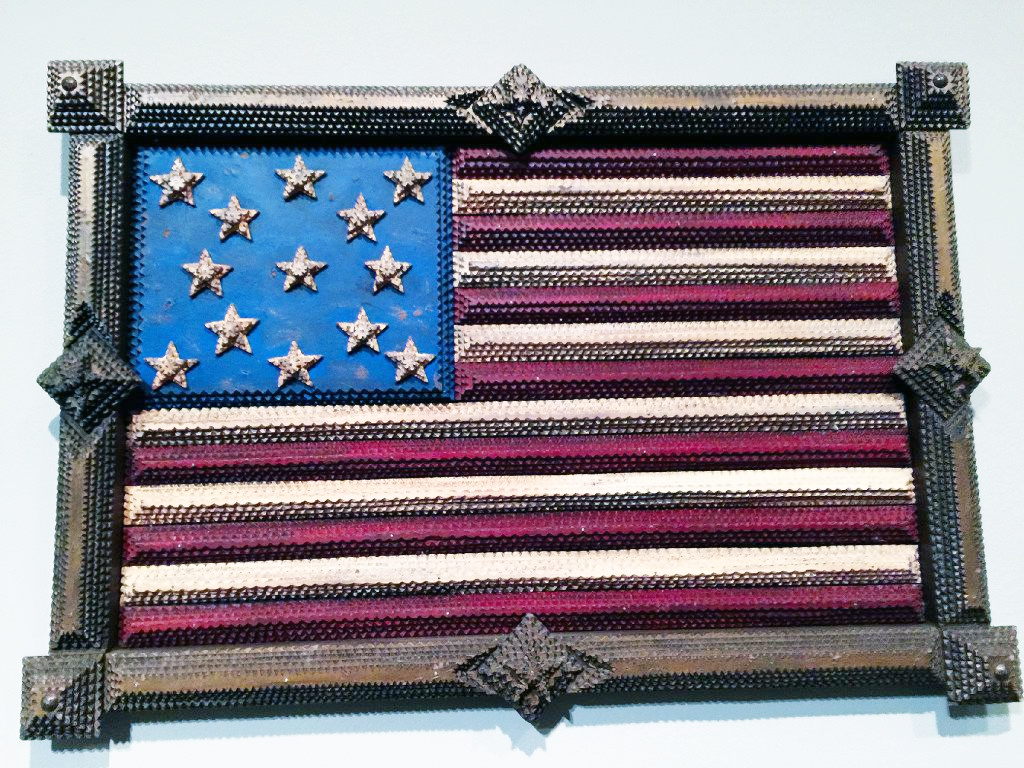 Patriotism is one of the prevailing tramp art themes, as seen in this American flag wall decoration.

As for those elderly flags, treat them with great care. It is best to preserve them in appropriate frames or in acid-free boxes with acid-free wrapping. Do not hang them in the light, but keep them in the shade with minimal exposure to light. And, as always, visit great museums like the Revolutionary War Museum in Philadelphia and the Smithsonian Museums in Washington D.C. to see examples of the real thing in good to great condition.
And beware of the many fakes. Tea staining is indeed “a thing” but if you know your fabrics, dyes, paints, and ovens (some artificial flags have been baked!), you have a better chance of buying one that is at least vintage.

Give Me Liberty: The Magazine of World War II