News and Views from the World of Antiquing and Collecting
By Ken Hall
One coin that numismatists can never own – but that could conceivably be minted – is a platinum trillion-dollar coin. Say what!? Believe it or not there’ve been some calls for President Obama to authorize a few, as a way to get around the looming debt ceiling crisis. In fact, there is a legal loophole that allows the Treasury to mint platinum coins in any denomination that the secretary likes. The New York Times op-ed writer Paul Krugman said minting the coin would be “silly but benign,” but he called the fight over the debt limit “equally silly.” 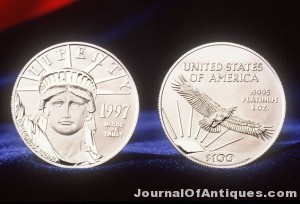 But would Obama ever really green-light the minting of a platinum trillion-dollar coin? Probably not. Even so, the very idea of it spooked one Republican lawmaker so much he went so far as to introduce a bill to make sure it doesn’t happen. Rep. Greg Walden of Oregon said, “This scheme to mint trillion-dollar platinum coins is absurd and dangerous, and would be laughable if the proponents weren’t so serious about it as a solution. I’m introducing a bill to stop it in its tracks.” No word yet as to whether the bill will ever make it to a floor vote.