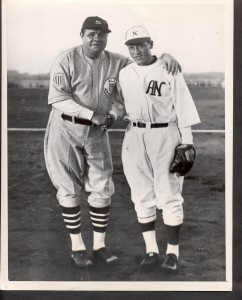 A uniform that Babe Ruth wore in 1934 during a U.S. All-Star Tour of Japan went on display at the Louisville Slugger Museum in Louisville, Ky. The uniform was shown for only two days — November 11 and 12 — to coincide with an auction of baseball memorabilia held by Hunt Auctions, Inc., of Exton, Pa. Hunt had acquired the uniform on behalf of a collector for $771,000. It was publicly unveiled for the first time in 70 years. Ruth wore it during a pre-World War II tour of the Pacific.
[amazon_carousel widget_type=”SearchAndAdd” width=”550″ height=”200″ title=”More on Babe Ruth:” market_place=”US” shuffle_products=”False” show_border=”False” keywords=”Babe Ruth” browse_node=”” search_index=”Books” /]