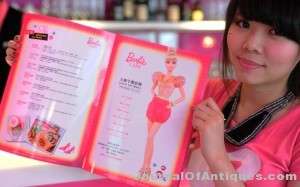 A restaurant inspired by the iconic 54-year-old Barbie doll has opened in Taipei, the capital city of Taiwan. The Barbie Café, located in the city’s fashion district, is very pink and has been licensed by Mattel, the toy maker that owns the rights to the doll. The staff wears uniforms with pink Barbie logo T-shirts, matching tutus, Barbie logo armbands and glitter and tiaras on their heads. The food was designed by nutritionists and aims to appeal to those who want to keep their Barbie-like figures. The décor cost $1.7 million.

Designs from the Golden Age of Hawaiian Shirts

Ken's Korner: Ken, sporting a makeover, is trying to win back Barbie