News and Views from the World of Antiquing and Collecting
By Ken Hall
The Royal Canadian Mint has stopped producing penny coins – something that has been talked about here in the States. The main reason: it costs more to produce a penny than it’s worth (same as here). Canadian pennies will still be around, and will only fully disappear when stores stop accepting them. Shops, meanwhile, can still advertise an item for, say, 99 cents, and even though the consumer won’t be able to pay that price physically, at the point of sale the price will be rounded up or down, once taxes have been factored in. 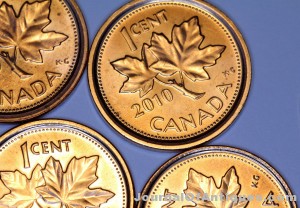 So if something rings up for $1.02, it will be rounded down to $1 (if the store wishes to round down; they aren’t required to by law and some will always opt to round up). It’s assumed that, over time, the Canadian penny will appreciate in value as it becomes an historical artifact. But literally billions have been produced, so they probably won’t fund many retirements. The penny was done away with in Australia in 1966 and the ‘land down under’ has been doing nicely with five-cent pieces ever since. Will America be next?

The Price of Least Resistance