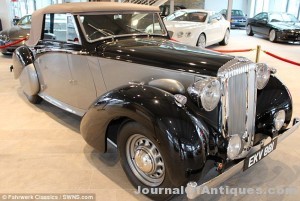 The vintage German-made Daimler DB 18 Drophead Coupe used by British Prime Minister Winston Churchill from 1944-1949 – from the tail end of World War II to the years immediately following – has sold on eBay for about 470,000 euros ($616,000). The silver and black coupe, one of only eight made by Daimler after 1939 (and believed by experts to be the only one left) was offered on eBay by German seller Sabri Cakar. The vehicle was previously authenticated by British auction house Historics at Brooklands.